Who Do You Love by Jennifer Weiner 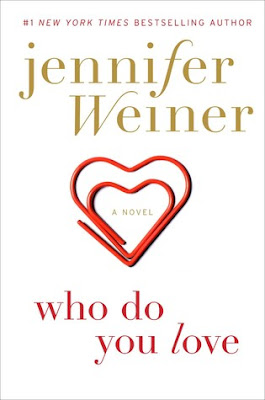 Rachel Blum and Andy Landis are eight years old when they meet late one night in an ER waiting room. Born with a congenital heart defect, Rachel is a veteran of hospitals, and she's intrigued by the boy who shows up all alone with a broken arm. He tells her his name. She tells him a story. After Andy's taken back to the emergency room and Rachel's sent back to her bed, they think they'll never see each other again.

Rachel, the beloved, popular, and protected daughter of two doting parents, grows up wanting for nothing in a fancy Florida suburb. Andy grows up poor in Philadelphia with a single mom and a rare talent that will let him become one of the best runners of his generation.

Over the course of three decades, through high school and college, marriages and divorces, from the pinnacles of victory and the heartbreak of defeat, Andy and Rachel will find each other again and again, until they are finally given a chance to decide whether love can surmount difference and distance and if they've been running toward each other all along.

With honesty, wit, and clear-eyed observations about men and women, love and fate, and the truth about happy endings, Jennifer Weiner delivers two of her most memorable characters, and a love story you'll never forget.

This is the love story between two star-crossed lovers who keep on missing their chance.

Rachel Blum met Andy Landis for the first time when they were eight. Rachel was born with a heart condition and she spent most of her childhood and adolescence inside the walls of a hospital. She meets Andy when he breaks his arm and she keeps him company in the ER until his mother comes and gets him.

Andy grows up poor and without a father. He deals with his problems with his only pastime: running. He becomes good at it and his only dream is to be an Olympic champion. Over time, he keeps on meeting with Rachel and he develops feelings for her, but it never seemed to be the right time for them.

Who Do You Love was an excellent book. The writing felt real and it had depth. Both characters go through so much. They love each other, but they aren't perfect, just like in real life. They both make mistakes and some of their apologies to each other were too weak. They frustrated me, make me feel empathy and I was sad for their sorrows. My one complaint would be that I missed an epilogue big time.

Email ThisBlogThis!Share to TwitterShare to FacebookShare to Pinterest
Labels: Review Andy Landis, Jennifer Weiner, Rachel Blum, Who Do You Love