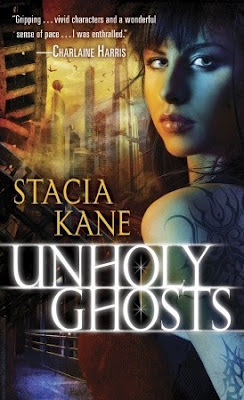 Chess (Cesaria Putnam) works for the Church of Real Truth as a Debunker. She has magic and tattoos that have power. She is able to connect with Ghosts.

Many years ago, Ghosts rose up and killed a third of the population. This was known as the Haunted Week. The Church of Real Truth used to be a tiny group, devoted to the theory and study of magic. After that horrible week, they became the government and authority. They were the only ones who were able to control and defeat the ghosts.

We know Chess was left by her parents and placed in the system. She has been abused and she is a drug addict (probable to forget the abuse). She thinks of the Church as a safe place.

There a two male characters, both with flaws.

First, there is Terrible who works for a drug lord as the bodyguard. In the beginning, Chess thinks of him as an unattractive killer. Later, she gets to know him better.

The other man is Lex, who is also a bad/good guy. He needs help from Chess and in exchange, he will provide her with free drugs.

Many of my friends love this series. I will have to read the rest to see if I become as addicted as they are. My main problem is the drugs and the lack of other religions. 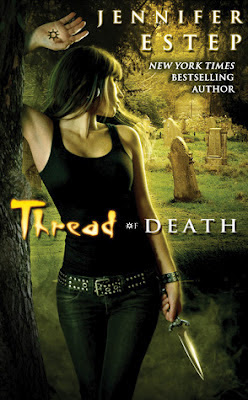 Evil Mab Monroe is dead. Gin Bianco (Spider/assassin) life should be easy now. That is not the case. Many criminals are going to try to make her life a living hell. They want to take her down.

Gin is still recuperating from her last injuries, but she knows she has to attend the funeral. She has to look at the new faces who may want to harm her.

One interesting detail was Phillip Kincaid's prior relationship with Owen. I wonder if they were friends or family before....

What I love about this series- How our heroine can prevail fighting till the end, but she wouldn't be able to win without the "family" she has created. I love Owen (what a difference from a certain cop in earlier books)

The fighting scenes are always intense.

This is a series I will read until Mrs Estep decides to stop. Today I realized that she has many other short stories that I have not read. Will need to buy them asap.

By a Thread by Jennifer Estep (Elemental Assassin #6) 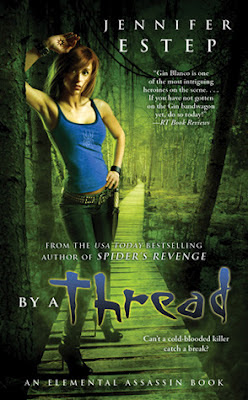 Girls on a road trip.

Gin Bianco (aka Spider) is tired of killing people. Since she killed Mab Monroe everyone is gunning for her. They believe by killing Gin they will gain respect and power.

Flynn offers a solution. Why doesn't Gin take a vacation, leave town for a bit and relaxed. Bria has a friend in her old hometown that she would like to visit. Gin decides this may be the best way to bond with her baby sister.

When they get to town, they stopped by the restaurant Bria's friend owns. While enjoying a meal, they realized that Bria's friend is in trouble when some hired guns appear there to ask her to sell the place or else. A vampire is buying certain properties and no one seem to be able to stop him.

Gin volunteers to help despite Bria not been completely happy with it.

To Gin's shock, Bria's friend's fiancee is none other than detective Donovan, who crushed her heart a few books before.

The vampire is as bad as Mab, the book is action packed, the sisters are able to communicate better and of course I love how Owen stands behind Gin a hundred percent.

Spoiler Fangalert: so happy that Gin was able to turn down Donovan. I needed the closure. Despicable man without no guts. Good riddance!

Stuck in the Middle by Virginia Smith 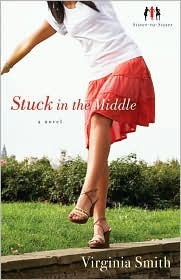 Stuck in the Middle
Sister to Sister #1
Virginia Smith

Joan Sanderson is the middle daughter. She works in a furniture store and lives at home with her mother and grandmother. She wishes she could move away but because of her grandmother's health issues, she'd decided to move back home to help.

Her father left many years ago and Joan still misses him. She holds a grudge against her mother for letting him go.

One fine day, her world suddenly becomes more interesting when a doctor moves next to her house.

Ken Fletcher is starting a new practice and his sister decided he needed a dog, which he named Trigger. Thanks to the mutt he meets Joan and strikes up a conversation.

Joan's grandmother invites him to dinner and when Joan's younger sister meets him, she decides she may want him for herself. Some sibling rivalry ensues. Joan knows her younger sister is beautiful and successful. She is a marketing analyst.

Joan starts doubting herself. How can she compete with her baby sister?

We also meet Allie who is Joan's older sister. She is pregnant and happily married. Probably my favorite character. She is funny and inventive.

This is a Christian Lit. 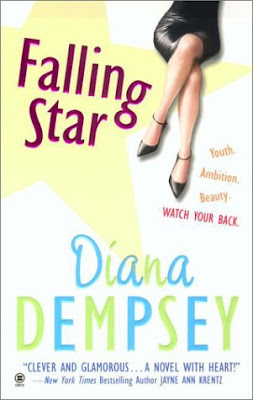 Natalie Daniels is a reporter. She is about to turn forty which is when things turn ugly for her. She is famous and well thought of by the public but her private life is mess. Miles, her soon to be ex- husband may be cheating and stealing from her. Her new boss Tony wants a fresher face to replace her. He wants Kelly, her trainee to replace her.

She starts making mistakes during a live newscast and by pursuing a certain story she ends up in jail. Natalie finds herself only trusting her Australian agent Geoff. But its more than friendship what she wants, however, he is already engaged. Trouble, trouble....

This was a book about a female trying to survive obstacles due to her age and profession. Natalie is a fighter and she is able to pick up the pieces of her life and takes control.

I enjoyed this book.

At Last by Julie Ortolon 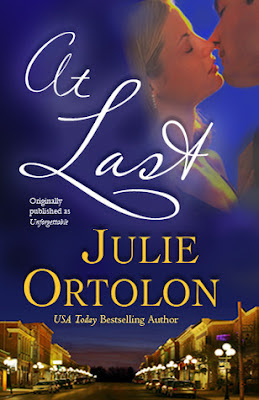 The name of the town is Hope, and this is a book about having hope. Riley Stone is a singer who has moved back home after ten years of trying to be discovered. She was blessed/cursed with a great body which everyone during high school assumed she was a loose cannon. Nothing can be farthest from the truth. She spent her high school years loving Jackson Hope who wouldn't even look her way.

Jackson Hope is coming back to his hometown. And when I say his hometown, I mean his family owns the whole town. They can make any decisions, sometimes with poor outcomes. The town is falling apart.

Riley decides to take the initiative to protect the town's music hall and she won't rest until she saves it.

Jackson is shocked to see that Riley is back in town. Their attraction is real and soon they are sharing more than an idea to save the town.

Sins of the Demon by Diana Rowland 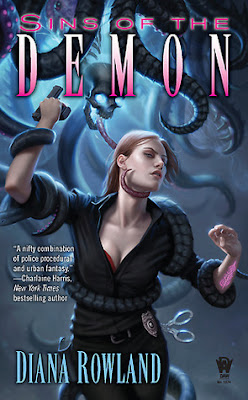 Kara Gillian has a new roommate, Eilahn, a demon left there by the Demon Lord Rhyzkahl to protect her. Their interaction is one of the things that I truly enjoyed this book. They even have a cat now, Fuzzykins, who of course hates Kara but loves the demon.

Kara's life is complicated. She is a demon summoner who is trying to stay on this side of the earth. Unfortunately, someone is trying to summon her to the demon realm where she will become a servant. And in her current realm, someone is murdering people she knows and has every reason to dislike. Is she getting framed??

The story moves smoothly. Many funny moments and intense times too.

One of my complaints is that Rhyzkahl appears more like a cameo than a presence. Is this to let us know that Ryan is the one? I don't know, I would like to see more of him and why he hates Ryan so much- I'm sure it all has to do with one girl (maybe a Fangalert- our very own Kara in a twisted way)

I have to admit that Agent Ryan was ok in this book but as you can guess I like Rhyzkahl better.

Now, there is a major cliffhanger (who nobody likes!) and now we have to wait a year for the resolution.

I still love this series and it is one of my favorites.

Is it wrong that I'm still rooting for a particular Demon Lord and not an ex-Demon? Rhyzkahl needs to be back in full force in the next book wearing jeans and looking hot.

The Sweetest Thing by Barbara Freethy 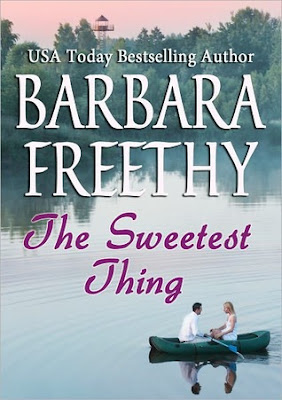 Faith Christopher owns a bakery which she shares with her almost mother in law. Faith was engaged to be married but her fiance passed away. She is still very close to his family and spends many weekends with them. Her fiancee's brother is asking her to be his wife out of pressure from his parents. Faith is tempted to say yes. However, things will change when Alex Carrigan arrives at her bakery looking for his Grandfather.

Alex has been alone for a long time, suddenly his Grandfather, Julian moves in with him and a girl, Jessie who may be his own daughter also moves in.

Julian is obsessed with fixing a mistake in his past and swears it is the reason why his family can not find true love. Faith decides to help break the curse after fifty years. 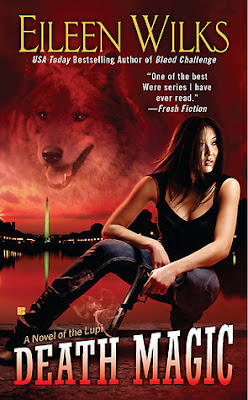 Lily Yu and Rule Turner's latest adventure has them in Washington, DC, where Lily has to testify before a Senate subcommittee. While staying there, the couple is invited to a barbecue at Ruben Brooks' house. The party is a front for a meeting where Ruben is asking Lily to join the Shadow Unit. Lily doesn't want to get involved because she believes it to be in a gray area and like a good cop she sees everything in black or white.

Lily is also dealing with having been given the Wythe Mantle and is trying to pass it on to whomever The Lady wants. The mantle is causing harm to her since it is not meant for a non-Lupi. She is getting headaches and mini-strokes. This makes Rule a little upset towards the Lady.

When the senator who is questioning Lily is murdered and all clues point to her boss Ruben Brooks, Lily will stop seeing in all black and white. She will need to help Ruben with the help of Cullen.

There is a big surprise in this book, which I was not expecting but it completely makes sense and I love than Mrs. Wilks thought about it. Very refreshing idea.

Mrs. Wilks has had Lily and Cullen mature as a couple and I just wish that other authors would keep the magic without giving us an endless love triangle or multiple cliffhangers.

Also, I like that Lily is a smart heroine who can defend herself.

I did miss other characters from the series, like Lily's grandmother, Benedict, Cynthia. At least we get some Cullen.

I can't wait for the next installment. I STRONGLY recommend this series.