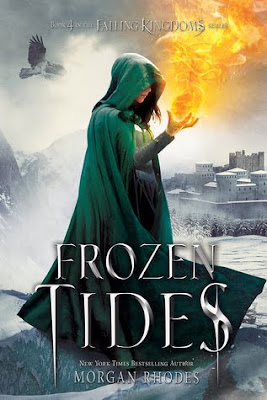 CLEO: Reeling after a bloody showdown in Limeros ending with Amara’s abduction of the water crystal, and a vacancy in the Mytican throne, Princess Cleo must cast aside her feelings and look toward her kingdom with the eyes of a Queen.

MAGNUS: With the kingdom in chaos, Princess Lucia still missing and quite possibly in danger, and a shocking realization about Cleo, the steely prince is once again torn between love and duty, leaving him wondering whether he’s strong enough to rule his people.

LUCIA: The young sorcercess has had her vengeance after the cruel death of her first and only love. Heartbroken and unable to trust anyone, she allies with the awoken Fire god, who also seeks revenge.

JONAS: After escaping death by the skin of his teeth, the defeated rebel—along with a mysterious stranger–leader reunites with Princess Cleo, only to find himself a mere pawn in a dangerous hunt for the elusive Kindred.

KING GAIUS: Abandoned by Melenia and betrayed by his own children, Gaius flees Mytica and sails to Kraeshia, where he attempts to ally with the famously brutal emperor across the Silver Sea.

This book was so infuriating, and I loved it. I have never been so frustrated with a book and yet still been so obsessed with it. Morgan managed to me make go from

within seconds throughout the entire book.
This book was full of action, romance, deceit, and plot twists. So many things happened in this book that I did not see coming AT ALL. I honestly don't know how Morgan does it time and time again. I couldn't put this book down. I stayed up late at night so I could finish this book. It was just so gripping and fantastic.
Lucia still annoyed me in this book. I liked her more in this book, but I still don't like her very much.  I was always disappointed when the book went to her POV. My favorite characters are Magnus, Cleo, and Felix. They were my favorite POVs to read from!
At the beginning of the book, the romance between Magnus and Cleo drove me insane. However, I knew I should not give up hope. I am glad I didn't give up hope because the ending made up for all of the frustration. MAGNUS AND CLEO ARE MY OTP OF ALL OTPS.

I will say that the romance that Jonas had with one character seemed a little unbelievable and it felt like it was kind of just there to make us feel things for that character. I would have loved to see Jonas and that character together, but I just couldn't buy it in this book. It made me so sad that their romance wasn't developed the way I wanted it to be. Overall, I loved this book. Morgan Rhodes continues to impress me with each book she releases. THE ENDING OF THIS BOOK KILLED ME. I CAN'T BELIEVE MORGAN ENDED IT LIKE THAT. NOW I HAVE TO WAIT FOR BOOK 5?!?!?!?