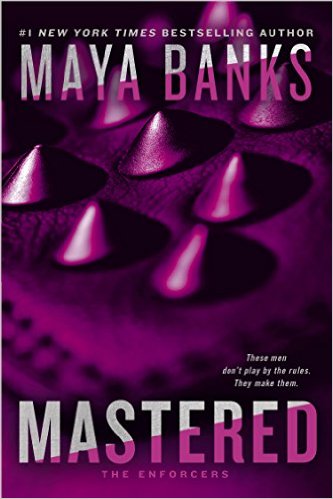 From the #1 New York Times bestselling author of the Breathless Trilogy comes the first novel in the Enforcers series—a bold new direction in erotic romance that explores the games men and women play, and the price they’re willing to pay for pleasure.What he wants, he takes with no remorse or guilt.She stood out in his club like a gem, unspoiled and untouched. A lamb among wolves, she clearly didn’t belong. Drawn to her innocence he watched as she was surrounded by men who saw what he did—but no one but him could touch her. He summoned her to his private quarters. He sensed her fear. He also recognized the desire in her eyes. And he knew she wouldn’t leave before he possessed her. She had no need to know his secrets. Not until he had her under his complete and utter control.What he wants, she isn’t sure she can give him.The moment he told her want he wanted, she couldn’t resist. Instinct told her to run, but her heart said stay and walk the fine line between pleasure and pain. Though she wasn’t sure she could ever completely surrender, the primal part of her wanted to try, even knowing this man could break her in ways she never imagined. Because once he possessed her, he owned her and it would be too late to turn back. She can only pray that he doesn’t destroy her in the end.

This book in Maya Banks style just starts off steamy! The beginning just packed a punch with a mixture of drama and a smokin' hot first encounter!

Drake Donovan is the owner of Impulse, Evangeline happens to be a patron of said establishment for one night that is. As soon as he sees her he has to claim her. She isn't like the normal women that frequent his place and she must be his. For her he seems to breaking all of his rules. Evangeline isn't used to his lifestyle or his dominance. She's just a hardworking girl with a Southern accent who is trying to help her family get by and never did she think that she would meet someone like Drake. What starts out as sex turns into so much more as emotions come into play, but is it all too much for Evangeline?

As usual Maya Banks truly succeeded in making me root for this couple. I love Drake's dominating ways and Evangeline's feisty southern attitude. I really enjoyed the story, mixed in with all of the bangin' sexy time (no pun intended). Maya had me engaged from the very first page.
I am devastated that I have to wait several months to read the next book! I need it now!

A copy was provided by the publisher in exchange for an honest review.
Posted by MrsJZBarrons at 1:08 PM