Coming Apart at the Seams by Jenna Sutton 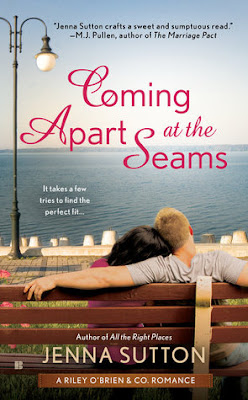 From the author of All the Right Places, a sweet and sexy romance about finding the right words and the perfect fit...

Love can take some time to break in...


Teagan O’Brien, heiress to the Riley O’Brien & Co. denim empire, is anything but a spoiled rich girl. She’s worked hard to secure her place in the family business and can hold her own, in and out of the office. Only one man has ever been able to get under her skin—sexy football star Nick Priest. Years ago they crossed the line from friends to lovers, but he left her heartbroken. Since then, she’s been determined to keep him at arm’s length—no matter how tempting he looks in his jeans...


Nick has fortune, fame, and looks that make most women hot and bothered. But he doesn't have the woman he really wants. He knows he screwed up when he walked away from Teagan, and now that he has a second chance, he’ll do whatever it takes to win her over—no matter how tongue-tied he gets...

I was already intrigued by the backstory between Teagan and Nick after the kiss they shared in All the Right Places. I knew I had to read their story, and what a story it turned out to be!

Teagan is Quinn's sister. She works for the family business and she's a lawyer. She's smart, hard worker, and loves her family. She is tight with her two brothers although she almost messed up Quinn and Amelia's relationship. She fell in love with Nick years ago when they both were living in Boston. She thought he only wanted her as his friend and when he pushed her away she was devastated. Now, she doesn't want anything to do with him.

Nick is back in the Bay area to get his girl back. It has taken him many years to realize that he cares for Teagan more than just as a friend. He wants her to give him a second chance and he is not giving up. Convincing her is his number one priority.

Gosh, Teagan and Nick suffered for so many years. Saying they had major communication issues is an understatement. I can understand why they felt the way they did and I felt sympathy for both characters. I can't blame Nick for his insecurity and I loved that Teagan didn't care.

I'm usually not a fan of past and present stories but in this case, it worked great.

In regards to secondary characters, I want Vanessa to get a book too. Hopefully, I won't have to wait too long for it.