The Aftermath by R.J. Prescott 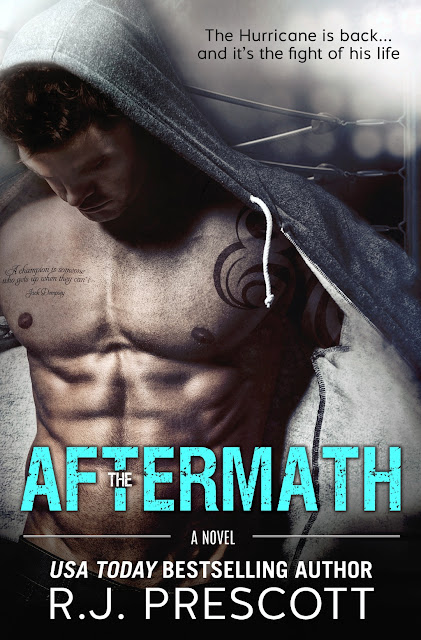 Cormac “the Hurricane” O’Connell’s star is on the rise. Billed as the most promising young boxer of his generation, his new career is taking him to places he never dreamed. But O’Connell only needs one thing in life: his wife. In her final year of college, Em cannot follow him around the world but together they make it work.

Just when everything they ever wanted is on the horizon, the past resurfaces to haunt them and O’Connell realizes that justice might not be a part of his happy ever after.
He couldn’t protect Em once before, but in the aftermath of the hurricane, he will make sure that never happens again.

The Aftermath had all the ingredients I liked from The Hurricane. All the characters that I like are back with the same banter, romance and action. We also get a couple of additional characters like Cormac’s new American manager and his sister. In addition, we're privy to the beginning of a few romances by some of the other guys. This gives me hope that each of them will get a new book in the future.

At the beginning of the book, Cormac is having some serious issues with anger. He hates what her stepfather did to Em and he wants him to be in prison for a long time. The trial is coming soon and Em's still having nightmares about what he did to her.  Cormac wants to make her feel safe and he's still feeling guilty he was not there for her when she was kidnapped.  Cormac’s outlet for his anger is sometimes misplaced and it’s harder for him to communicate with Em about it.

The gym guys are there to help them both. They truly behave like family. They all love Em and they will do anything to keep her safe.

The Aftermath is solely written from Cormac’s POV and I loved it. He has so much love for Em. Yes, he has a lot of insecurities and he’s very possessive of her but it never rubbed me the wrong way. He wanted to protect her, make her happy and keep her safe.


Em was very supportive of Cormac’s boxing career. She was his number one fan. She was there to make his dreams come true.

“Okay. Open your eyes. What do you think?” I took my hands away and let Em look. This was almost as nerve wracking as asking her to marry me. Back then I was asking her to forget all the crap surrounding me and imagine a better version who’d make something of themselves. I was asking her to take a chance on me. Now I was doing the same with this house.
Tommy was right. It was a shit hole. But when I was done, it would be a palace. A home for the two of us no one could ever take away. I stared at her expression, looking for any sign at all about how she felt.
“I love it,” she whispered, looking up at it in awe. I let out a deep breath I hadn’t realized I’d been holding.
“I know it doesn’t look like much now, but imagine if I cleared out and repaired the front garden, put in new windows and new fencing. Liam and I have gone over this place inch by inch, and the roof is sound. With a bit of hard work, it’ll look great.”
I was rambling now. She’d already agreed to it, so I have no idea why I was giving her the hard sell.
“Can we afford it?” she asked, her eyes full of wonder.
“It’d take all our money and then some. But I’ve worked out a loan with Danny for what we need, and we can pay him back with the rent money we’ll save on our flat. We’ll have to fix it up on a budget but the boys have offered to help with the labor.”
With a squeal, Em threw her arms around my neck and kissed me loudly. “I can’t believe you found this place. It’s going to be amazing! I know I can’t do any building work but I can clean, strip wallpaper, and paint,” she babbled excitedly. “Ooow, we could go and get some paint samples today,” she suggested.
“We haven’t even had an offer accepted yet,” I pointed out with a chuckle.
“I know, but there’s nothing wrong with planning ahead. Can we look inside?”
“Sure. The agent is meeting us in a few minutes to show us around. It’s pretty rough inside, but the rooms are a nice size. You just have to use your imagination.”
“I can do that,” she whispered as she smiled at me adoringly. Her eyes were full of everything I’d felt when I’d first seen the place, and I knew she was imagining our future in a real home of our own.
My heart was so full I felt invincible. The way she was looking at me, you’d think I’d built this place brick by brick myself. I’d spend the rest of the day trailing after her doing whatever she liked just to keep that look. With another squeal, she covered my face in tiny kisses, making me laugh, until a discrete cough sounded behind us.
“Are you here for the viewing?” a skinny kid who looked about my age asked.
“Yes please,” Em answered. She was lit up inside and practically radiated happiness. People couldn’t help but be charmed by her natural warmth, and he was no exception. He smiled broadly at her and with a wink said, “Let’s go and check it out.”
My crossed arms and fierce glare told him that I wouldn’t tolerate another wink, and he got the message as he messed around with the keys nervously. Rolling her eyes, Em pulled on my arms until I uncrossed them and clasped her fingers between mine. She was used to me getting territorial around her but she really had no idea how many hungry looks followed her around.
The agent used his shoulder to push open the front door, past a mountain of junk mail, then fussed about brushing the dirt and paint chips off his suit. The previous owner really had gone to town with a baseball bat, and literally everything would need replacing but it didn’t matter. The more we looked, the more Em fell in love.
By the time we were done, there were stars in her eyes. Having realized that flirting with Em was hazardous to his health, the agent couldn’t get out of there quick enough. He told us to call the office if we wanted to make an offer.
“I’ll be in touch,” I promised him menacingly, mostly just to fuck with him, but he practically wet himself as he hightailed it back to his car. Em was so caught up in the house she didn’t notice. It was going to be a hell of a day.

Enjoy Em & Con’s story from the beginning with THE HURRICANE, available now in e-book and coming to trade paperback February 2, 2016! 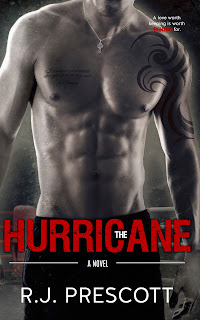 Emily McCarthy is living in fear of a dark and dangerous past. A gifted mathematician, she is little more than a hollow, broken shell, trying desperately to make ends meet long enough to finish her degree. Through an unlikely friendship with the aging, cantankerous owner of an old boxing gym, Em is thrown into the path of the most dangerous man that she has ever met.

Cormac "the Hurricane" O'Connell is cut, tattooed and dangerous. He is a lethal weapon with no safety and everyone is waiting for the misfire. He's never been knocked out before, but when he meets Em he falls, HARD. Unlike any other girl he's ever met, she doesn't want anything from him. Just being around her makes him want to be a better person. They are polar opposites who were never meant to find each other, but some things are just worth the fight. 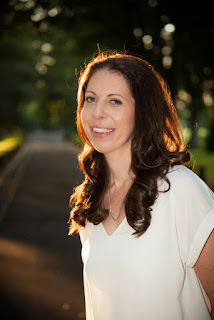