Between a Vamp and a Hard Place by Jessica Sims 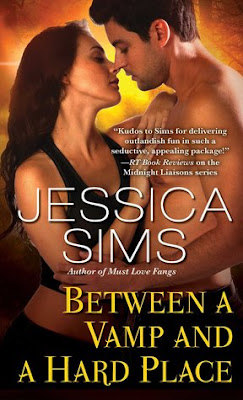 In the wickedly funny spirit of bestselling authors Kerrelyn Sparks and Molly Harper, this sexy paranormal romance features an estate broker and a 600-year-old vampire out for revenge.


Lindsey Hughes loves antiques and couldn’t be happier to make a living in the estate sale business. But when her assistant accidentally buys an entire estate without her approval, Lindsey is forced to clean up the mess herself.


Lindsey travels to the newly purchased, age-old house in Venice, Italy, and soon discovers more than she (never) bargained for. While digging through the hoarder’s trove that fills every floor, she finds a secret staircase behind a wall that leads to a strange coffin…with an even stranger inhabitant.

Vampire Rand FitzWulf has been in his coffin for 600 years. But now that he’s awake, he’s ravenous, and there’s a delicious-smelling woman with a rare blood type in his basement. Luckily, Lindsey has more to offer than blood: she agrees to travel throughout Europe with Rand to help him get revenge on the one who turned him. But as the unlikely pair grows closer, will the billionaire vampire be overtaken by his thirst for blood—or his thirst for love?

Lindsey Hughes is doing what she loves. She and her best friend Gemma started a business acquiring antiques from estate sales and selling these objects afterward. Lindsey's life is turned upside down when Gemma decides to pay ten thousand dollars to go halves on an estate sale in Italy.   With no other course of action, they traveled to Europe together and since they can't afford a hotel, they decided to stay at the home they are cleaning up. When Lindsey finds a coffin, the last thing in her mind is to find an actual vampire. Not only it's Rand a vampire, he is also a very attractive one.

Rand FitzWulf has been asleep for six hundred years after being staked through the heart. When he wakes up, he finds Lindsey. She smells and tastes different than any other person he has fed from. He is attracted to her and he convinces her to help him find his other missing vampire friends. Many centuries ago, four men were turned by the "Dragon". Rand was one of them. The Dragon had the power to dominate their minds but over time, Rand became disillusioned by him. Now, in the present, he's willing to fight The Dragon. The only problem is that if The Dragon dies, so does Rand.

I love Jessica Sim's humor and I knew Between a Vamp and a Hard Place was going to have some too.  The book is fast-paced, for the most part, lighthearted and with two main characters with plenty of chemistry.  I laughed every time Rand tried to make sense of our current technology and it was funny to see the world through his eyes. Things that we now take for granted like cell phones were a complete shock to him.

As for the secondary characters, Gemma was a great one. It makes me want for her to get her own story. She was funny, could curse like a sailor, but she was 100% on Gemma's side.

Email ThisBlogThis!Share to TwitterShare to FacebookShare to Pinterest
Labels: Review Between a Vamp and a Hard Place, Jessica Sims, Lindsey Hughes, Rand FitzWulf