Anything for You by Kristan Higgins 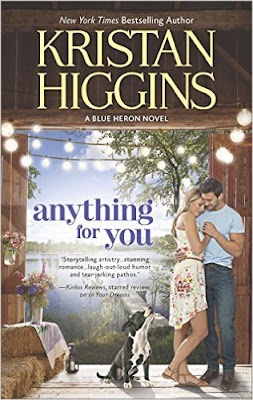 Before you get down on bended knee…

…you should be pretty darn sure the answer will be yes. For ten years, Connor O'Rourke has been waiting for Jessica Dunn to take their on-again, off-again relationship public, and he thinks the time has come. His restaurant is thriving, she's got her dream job at Blue Heron Vineyard—it's the perfect time to get married.

When he pops the question, however, her answer is a fond but firm no. If it ain't broke, why fix it? Jess has her hands full with her younger brother, who's now living with her full-time, and a great career after years of waitressing. What she and Connor have is perfect: friends with an excellent benefits package. Besides, with her difficult past (and reputation), she's positive married life isn't for her.

But this time, Connor says it's all or nothing. If she doesn't want to marry him, he'll find someone who does. Easier said than done, given that he's never loved anyone but her. And maybe Jessica isn't quite as sure as she thinks…

This book had all the “feels”. It made me laugh, cry, laugh again. I knew Conner was a great guy, but I never knew his story was going to hit my heart this way.

Connor O'Rourke is Colleen's twin from Waiting On You. He works with her at their tavern. He is the chef, she's usually the one behind the bar. They have a great relationship and despite their banter, they support each other 100%. Connor doesn’t have a good relationship with his father since he knew he had cheated on his mother. Connor has only loved one woman and her name is Jessica. For years, he has loved her and for years, she has broken his heart every time she had walks away from him.

Jessica Dunn was the town slut. She had the reputation of Jessica Does. She doesn’t care (or, at least, she tries for it not to bother her). The only thing that matters to her is Davey. Her brother who has special needs. She will do anything for him. Or better yet, she has done everything for him since her parents had failed them. Both of her parents were alcoholics and growing up, Jessica and Davey had no one. Jessica likes Connor and she wants to be with him, but she doesn’t think they could have anything serious since Davey hates Connor.
But, for how long is Connor going to let her break his heart one more time?

"Every time I think you can't break my heart again, ...you find a way."

I had so many feelings reading Anything for You. Connor was beyond awesome. He thought of himself as grouchy and grumpy when in truth he was sweet and thoughtful. He cared about all the women in his life. Was a great son, brother, and friend.

Jessica had it tough. She had to deal with adult problems from a very young age. It was hard to deal with Davey at times. She did everything she could for him. Even, pushing away the only man who loves her.

I can’t  recommend this book enough. It's a great addition to the Blue Heron series, but I think you can still read it as a standalone.