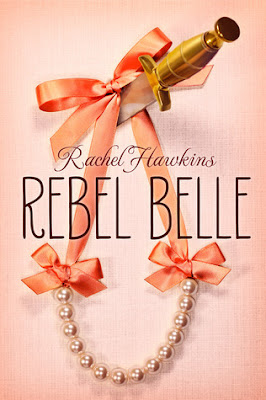 Harper Price, peerless Southern belle, was born ready for a Homecoming tiara. But after a strange run-in at the dance imbues her with incredible abilities, Harper's destiny takes a turn for the seriously weird. She becomes a Paladin, one of an ancient line of guardians with agility, super strength and lethal fighting instincts.Just when life can't get any more disastrously crazy, Harper finds out who she's charged to protect: David Stark, school reporter, subject of a mysterious prophecy and possibly Harper's least favorite person. But things get complicated when Harper starts falling for him—and discovers that David's own fate could very well be to destroy Earth.With snappy banter, cotillion dresses, non-stop action and a touch of magic, this new young adult series from bestseller Rachel Hawkins is going to make y'all beg for more.

Wow, I enjoyed this book so much more than I thought I was going to! Rachel Hawkins did a wonderful job at creating a book that had a lot of action and fantasy themes while still being fun and light hearted. I also thought Rachel did a great job of making the writing flow well. The dialogue was believable and hilarious!I really liked all of the characters in this book. There weren't any characters that I disliked (besides the enemies). I loved David and his sarcastic and witty humor. His constant bickering with Harper was hilarious. Speaking of Harper, I thought she was fantastic. Harper was hilarious, witty, smart, and kick ass. In the beginning of the book, I was worried I wasn't going to like her since she was so obsessed with looks. Instead, she turned out to be like Buffy, which I loved.

I also thought the romance was great in this book. I was a little disappointed that there was a slight love triangle, but the love triangle honestly wasn't that bad at all. Rachel Hawkins did an awesome job creating a romance between Harper and David that was swoon worthy and hilarious. I am so happy the romance developed the way it did. I wish there would have been more information on the history of the Oracles, Mage, etc. I would have like to learn a little bit more about that. I also would have liked for a little less cotillion drama/talk. However, those are just minor things. Overall, I thought this book was great! I am so happy that I finally got around to reading it. This book had humor, dresses, romance, and fighting. I cannot wait to read the next book to see more of Harper kicking ass.