The Rock by Monica McCarty 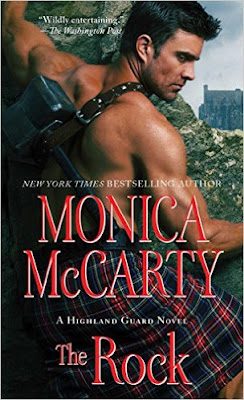 The first time he caught sight of Elizabeth Douglas, Thomas MacGowan thought she was a princess. To the son of the castle blacksmith, the daughter of the powerful Lord of Douglas might as well be. When it becomes clear that his childhood companion will never see him as a man she could love, Thom joins Edward Bruce’s army as a man-at-arms to try to change his lot. If he’s harbored a secret hope that he could close the gap between them, he faces the cold, hard truth when Elizabeth comes to him for help. She might need the boy who used to climb cliffs to rescue her brother from the hands of the English, but she would never see the son of a smith as a man worthy of her hand.

Thomas MacGowan has loved Elizabeth Douglas since the first time he saw her. She was a little girl then and he thought she was a princess. His father tells Thomas she is unreachable. She is a lady and he is only the son of the blacksmith. He has nothing to offer her but they become fast friends with Thomas saving her a few times. Yeas later, when Elizabeth refuses his proposal, he's devastated and decides to join Edward Bruce's cause against the English. He wants to show Elizabeth he can do better and climb the ranks to achieve a better status.  Thomas is strong and he's known to be able to climb the most difficult walls. This brings the interest from the Highland Guard to his doorstep. He might be able to climb the walls of castles and take them back from the English. Nonetheless, this is not enough to make Elizabeth stop her bethrodal.

I was so happy to start The Rock. I read The Striker and I loved it.  Monica McCarty does a great job with her descriptions and I can almost visualize myself during those hard times. I wish I had read the rest of the books but I don't believe it's necessary to enjoy it.

In regards to the main characrters, I found myself annoyed with Elizabeth at times. She had a man promising to love her and cheerish her and she was oblivious to his love until she sees him without a shirt! Then lust takes over and then she realizes her mistake.  I know it was unheard of marrying below your status but how can she say no to Thomas!

Thomas was written perfectly. He was strong, determined and would do anything to convince Elizabeth that he could provide for her. Everything he did was for her. How many times did he save her?  I was happy Thomas was able to develop a relationship with his father and brother again.

I really can't wait for the next one in this series.