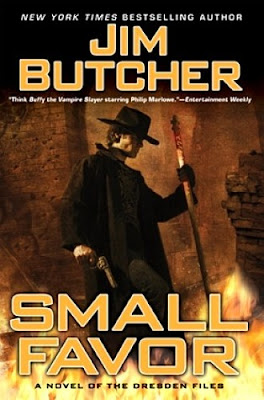 Harry Dresden's life finally seems to be calming down -- until a shadow from the past returns. Mab, monarch of the Sidhe Winter Court, calls in an old favor from Harry -- one small favor that will trap him between a nightmarish foe and an equally deadly ally, and that will strain his skills -- and loyalties -- to their very limits.

I knew there was going to be trouble when Mab asked Harry to do her a favor and what a favor it was!

Dresden's next adventure involves Marcone. Someone has kidnapped him and Mab is requesting Harry's help to find him. This leads to so many problems for him. First, Dresden has to convince Marcone's people to help him find Johhny and later on, he finds out that the Denarians have a hand in it. Chicago is actually loaded with them.  Luckily, Harry has formed his own little army. He has help from the Knights of the Cross, Molly, the Archive, Kincaid (which now thanks to Murphy has a first name...Jared), Gard, Hendricks, Bob, Mouse and Thomas.

This book was excellent. It had my full attention from the first chapter.
What I like the most about this series, is that the secondary characters have all developed very well defined personalities. It's almost as if they were real and the reader is watching the action from the sidelines but with the hope to jump into battle with Harry and help him win the war. In this case, the battle is against Nicodemus but we have summer, winter and in a way the black council trying to hurt Harry.