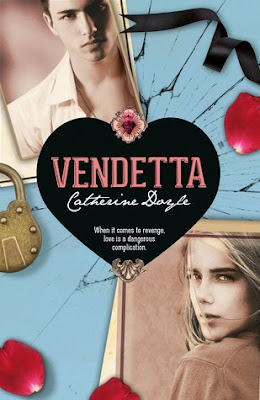 When it comes to revenge, love is a dangerous complication.With a fierce rivalry raging between two warring families, falling in love is the deadliest thing Sophie could do. An epic debut set outside modern-day Chicago.

When five brothers move into the abandoned mansion in her neighbourhood, Sophie Gracewell's life changes forever. Irresistibly drawn to bad boy Nicoli, Sophie finds herself falling into a criminal underworld governed by powerful families. As the boys' dark secrets begin to come to light, Sophie is confronted with stinging truths about her own family, too. She must choose between two warring dynasties - the one she was born into, and the one she is falling in love with. When she does, blood will spill and hearts will break.

After hearing about this book, I knew I had to get my hands on this book. Hot boys, forbidden romance, and the mafia?! This was a book that I couldn't pass up. The first half of the book was a little slow and felt like a typical (and slightly cheesy) YA book. However, around the halfway mark, this book became action packed and I couldn't stop reading! The second half of this book blew me out of water. I was on the edge of my seat, and I found myself screaming out loud numerous times.

I really enjoyed the plot of this book. I loved the mafia aspect, and I found it to be really badass. I was disappointed that it took until halfway through the book for the mafia aspect to really come to light. I would have rather seen it come up earlier in the book, because the beginning of the book was a little slow. However, I understood that we needed to see more of the characters without the mafia background before we could jump into the mafia world. My two favorite characters in this book were Nic and Luca. Nic was such a sweetheart. I know he did some bad things, but he honestly was a precious cupcake. He truly cared for Sophie, and he was very protective of her. Luca was kind of the opposite. Luca was intense, passionate, and intimidating. At first, I disliked him, but I couldn't help falling in love with him by the end of the book. I seriously love both Luca and Nic. I can tell there is a slight love triangle that will be forming. I really don't want there to be a love triangle, but I feel like it is inevitable. I want Luca and Nic to both get happy endings.....and marry me.

The main character, Sophie was a bit of an idiot. It took her such a long time to piece obvious things together. She wouldn't listen to anyone, and she constantly did dumb things. I appreciated how brave and fierce she was, but she was just so idiotic. I would like to see her grow into a smart and stronger character in the next book. I can tell she has a lot of potential to be an awesome character. Other than those minor issues, I liked Sophie as a main character.Overall, I really enjoyed this book! There were some things that I didn't like about this book, but I definitely liked this book as a whole. I am so excited to read the next book. I can't believe I have to wait for the sequel.