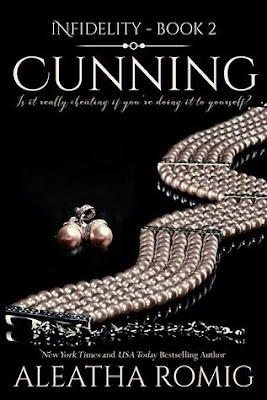 "He owns you. Whatever he tells you to do you do".

One year. No future. A past that won't go away.
Lennox "Nox" Demetri broke his own rule by making a deal. It may not have been directly with the devil, but that doesn't mean Satan himself isn't watching. Was it fate that brought Charli into his life and his bed? What will happen when rules are broken and secrets are revealed?
"New rules...my rules."
Alex "Charli" Collins found pleasure with Nox like she'd never known. That was before she knew his last name. Now that Infidelity is involved and the rules have changed, what will result when real life and fantasy collide?
Is it really cheating if you're doing it to yourself?
From New York Times and USA Today bestselling author Aleatha Romig comes a sexy, new dominant hero who knows what he wants and a strong-willed heroine who has plans of her own. With classic Aleatha Romig twists, turns, deceptions, and devotions, the depth of this new, epic dark romance reaches new levels and will have readers swooning one minute and screaming the next.
Have you been Aleatha'd?
CUNNING is a full-length novel, 360 pages, and the second of five books in the INFIDELITY series.


Infidelity - it isn't what you think.

I did my best to appear nonchalant as the bellman used my key to open the door of the executive suite. As he flipped the switch in the dark entry, I scanned the luxurious suite. Beyond the light illuminating the foyer, the furnishings appeared modern and sleek, while the walls were covered in heavy drapery keeping the late afternoon sunlight at bay.
"Ma'am, I apologize," the bellman said as he hurried across the living room. "Your suite has a spectacular view. Let me open—"
His feet and words stopped. My heart leapt to my throat. Stepping from a darkened doorway was a man who immediately dominated the executive suite.
"Sir, I didn't know that anyone..."
I no longer heard the man in the Mandarin uniform. Nox was all I saw. His silence filled the air muting anything else. His pale eyes narrowed capturing mine. Without words his icy gaze bore through me, planting my feet and sealing my lips. Displeasure radiated from his every pore. Rage rippled from his chiseled jaw as the muscles in his face and neck flexed. My knees grew weak as I realized this wasn't the man I remembered, but rather the man whose voice I'd heard on my call.
Only minutes earlier there had been so many things I'd planned to say and questions that consumed me. Yet, now, with Nox before me, none of them surfaced or made their presence known; instead the suite warmed as my heartbeat raced. I gripped tighter to my purse. With the winds of his displeasure swirling about the suite, I needed an anchor, something to ground me. 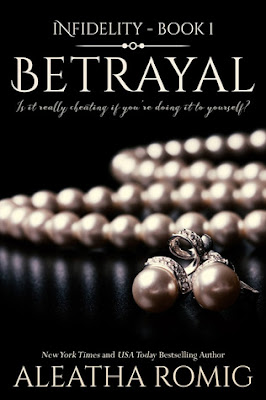 One week. No future. No past. No more.
Alexandria Collins has one week to live carefree—no ghosts of her past or pressures of her future haunting her. Reinventing herself as "Charli," she is knocked off her feet by a sexy, mysterious man who brings her pleasure like she never imagined.  With her heart at stake, she forgets that decisions made in the dark of night reappear in the bright light of day.

"Some of my tastes are unique. They aren’t for everyone. I understand that.”

Lennox "Nox" Demetri is wealthy, confident, and decisive—he knows what he wants. From the first time he sees Charli at an exclusive resort, he knows he wants her. Although he is usually the one to make the rules, together they agree on one:

One week. No more.

When betrayal comes from those closest to Alexandria, she must decide how far she is willing to go to survive. Choices are not always easy, especially when they involve the heart, body, and soul. After all, Infidelity is a business, and some rules are meant to be broken.

"Is it really cheating if you're doing it to yourself?"

From New York Times and USA Today bestselling author Aleatha Romig comes a sexy, new dominant hero who knows what he wants, and a strong-willed heroine who has plans of her own. With classic Aleatha Romig twists, turns, deceptions, and devotions, this new epic dark romance will have readers swooning one minute and screaming the next. Have you been Aleatha'd?

BETRAYAL is a full-length novel and the first of five in the INFIDELITY series.

Aleatha Romig is a New York Times and USA Today bestselling author who lives in Indiana. She grew up in Mishawaka, graduated from Indiana University, and is currently living south of Indianapolis. Aleatha has raised three children with her high school sweetheart and husband of nearly thirty years. Before she became a full-time author, she worked days as a dental hygienist and spent her nights writing. Now, when she's not imagining mind-blowing twists and turns, she likes to spend her time with her family and friends. Her other pastimes include reading and creating heroes/anti-heroes who haunt your dreams! Aleatha released her first novel, CONSEQUENCES, in August of 2011. CONSEQUENCES became a bestselling series with five novels and two companions released from 2011 through 2015. The compelling and epic story of Anthony and Claire Rawlings has graced more than half a million e-readers. Aleatha released the first of her series TALES FROM THE DARK SIDE, INSIDIOUS, in the fall of 2014. These standalone thrillers continue Aleatha's twisted style with an increase in heat. In the fall of 2015, Aleatha will move head first into the world of dark romance with the release of BETRAYAL, the first of her five novel INFIDELITY series. Aleatha is a "Published Author's Network" member of the Romance Writers of America and represented by Danielle Egan-Miller of Browne & Miller Literary Associates.