Coming Back by Lauren Dane 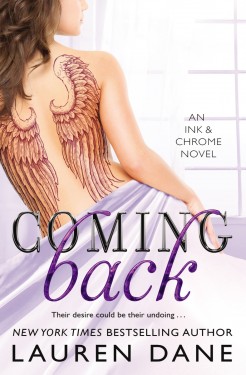 The men of Twisted Steel are great with their hands.And they're not afraid to get dirty.
Mick Roberts, the newest partner at Twisted Steel's custom hotrod and motorcycle shop, looks like a man with everything. But secretly he still craves the connection he lost when his best friend Adam and the love of his life Jessilynn walked out. Then, he wasn't ready for the pleasure they promised. Now, things have changed.
Rich, powerful, and insatiable, Adam Gulati is used to getting what he wants. And there's nothing he wants more than Mick and Jessi. He hasn't seen either in over a year, but the second he sets eyes on them again his memories-and his desires-can't be denied.
After trying to live without them, Jessi Franklin realized no one else can satisfy her like Adam and Mick. The three of them need one another-in more ways than one. It's time to stop pretending and submit to the hunger they all share. But once they go down this road, there's no turning back. As deeply devoted as they are, no one knows what great bliss their forbidden fantasy will find-or the price they may pay . . .

COMING BACK is the third novel in the Twisted Steele series and it is the most nontraditional book I’ve ever read.

Mick is now the new co-owner of Twisted Steele.  He invites Adam and Jessie to a celebratory party.  For the first time in years they are all finally back together.

Years before the three of them were in a relationship, but something happened that made them all run away from each other.  Now back together, they will fight all the negativity and finally talk about what happened to make them all take off.  But is love enough to keep such a nontraditional relationship alive?

Like I said above, this story is unlike anything else I’ve read.  I have to admit that it was really hard to get through for me.  Not because the writing or the characters, but because of the situation.

Three adults in a relationship together with plans of a future? It was very hard to grasp my mind around that. How could it be possible without jealousy and drama? But Lauren Dane made it work!

I’m not going to give this book a physical rating because I feel whatever I rate it will be due to personal preferences (if that makes sense) and not the writing and development of the story.

Lauren Dane is a phenomenal writer that makes you few everything as traditional and I can’t wait to read whatever else she has out there.