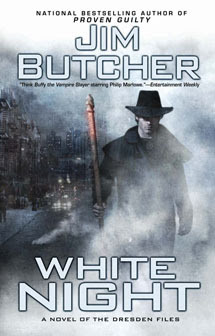 In Chicago, someone has been killing practitioners of magic, those incapable of becoming full-fledged wizards. Shockingly, all the evidence points to Harry Dresden's half-brother, Thomas, as the murderer. Determined to clear his sibling's name, Harry uncovers a conspiracy within the White Council of Wizards that threatens not only him, but his nearest and dearest, too...

Harry is hired by Murphy to investigate a series of female "suicides". Most of the victims are magic practitioners from the local coven. To his shock, the coven has hired Elaine (Harry's first girlfriend) to find out who's the killer. Elaine has been working in California. She like Harry, is "in the book" under "wizard". Some of the women who have disappeared have been seen leaving with a tall man wearing a cloak. Thomas fits the description but so does Harry. This leaves Harry with plenty of questions. He not only has to make sure Thomas is ok, but he has to stop the murders and get involved in a dispute between White court Vampire houses. And as if this was not enough, Cowl isn't dead and he wants to hinder Harry's progress in discovering the black council.

Great book! All the plot twists were innovative. The best characters in this novel besides Harry, were Thomas, Ramirez, Bob and Mouse.
The evil ones were all hateful. Glad some of them are finally gone for good.
White Night made me like Murphy a little more. She only bothers me when she is full of misplaced righteous indignation against Harry. I still have hope for Molly in the romantic department with Dresden. I like her more than Murphy.

“What is the point of having free will if one cannot occasionally spit in the eye of destiny?”