A Local Habitation by Seanan McGuire 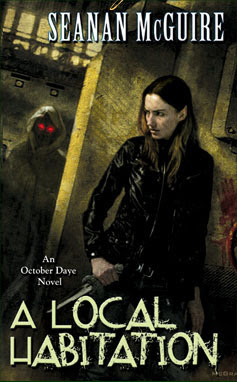 We begin this book with Toby getting drunk and guess who takes her home and puts her to bed...Yes, the King of Cats- Tybalt. Then, of course, he disappears for chapters to come.

Sylvester, Toby's liege has asked her for help once again. He wants Toby to go and check on her niece Countess January O'Leary who resides in the County of Tamed Lightning.

Questin goes with her. When they get there, they discovered that several people have died inside the company January works in.

January has tried to call Sylvester but she can't get in touch with him.

Toby starts investigating the murders, but when things get scary she decides to sent Quentin home. Connor comes to pick him up but when they are ready to leave Sylvester keeps him there because the roads are too dangerous.

Tybalt also gets there and helps protect Toby.

The mystery was not as challenging as the first book but again the world-building was excellent and Tybalt keeps on getting better. I just don't understand why Toby can't figure it out. Even though, she has not stopped wearing his jacket.

I guess I am becoming addicted to Men Cat - or any kitty kitty reference in books. There is Curran and now there is Tybalt for me. 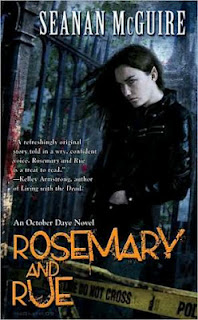 Toby is a PI. She is also not completely human, she is part Fae. She left the fae world, met a human-Cliff, got engaged, had a daughter. But, everything changes in the blink of an eye.

She is trying to help her friend and liege Sylvester Torquill and is following a lead in the kidnapping of his wife Duchess Luna and their daughter Raysel. She is discovered by the fae couple she is following (Simon- twin brother to Sylvester and Oleander de Merelands) Simon turns her into a fish for fourteen years.
When the spell is broken she finds out her human family doesn't want her anymore.

Later on, her friend the Countess Evening Winterrose, is murdered and she is cursed by Evening to investigate her murder or die trying.
She immerses herself back into the Fae world, where she finds her old flame Connor O'Dell, who has married Raysel. We also meet Tybalt, the King of Cats and pureblooded Cait Sidhe and Devin who has a kind of safe house for runaway teenagers. Toby used to be one of those kids.

With some of their help she is able to track the item for which Evening was killed.

The world building is excellent. I truly enjoyed this book.
The most intriguing character to me was Tybalt. I don't know where the romance is going, but I sure hope the King of Cats is part of it. 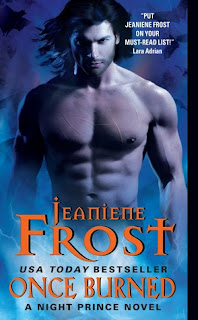 This is the First book in the series featuring Vlad.

The heroine of the series is Leila, a human girl with an electricity problem. She was electrocuted 12 years ago. She survived, but when her mother tried to do CPR, the current killed her mother.  She felt guilty about her death and left her father and sister. She changed her name to Frankie and joined the Gibsonton carnies. She has befriended a Vampire named Marty, who thinks of her as a daughter.

Then, Leila is kidnapped by a trio of vampires who have been hired by one of Vlad's enemies. While touching objects that Vlad had touched before she is able to make a connection with him. She asked him for help and he flies to the rescue, literally.
The attraction they feel for each other builds up.  And he becomes very possessive of her, specially when there are multiple attempts against her life. But, can Vlad love again?? Can they leave their guilt behind?

Most of the UF/Paranormal readers know who Jeaniene Frost is. We love her Bones and Cat Books.(Those are part of the Night Huntress Series in case you live in the moon).
We met Vlad a few books back and we begged Mrs Frost to write about him. She didn't disappoint her readers.
I was so excited about this book coming out. I actually preordered it from amazon for my Kindle fire and I also bought the book. (In hope of meeting JF in RT next year where she can sign my book!).

Read the book in an afternoon. JF's writing is always smooth and full of action. Love her characters.
There is a Cat and Bones cameo. I love how Bones and Vlad have a hate/tolerance relationship.
I won't give this book a 5 Fang (which hurts me) because I would have liked to see Vlad's POV. Also, because the ending was too sudden. (or maybe I just wanted more Vlad). 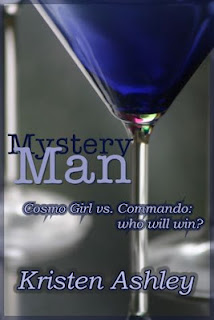 Gwendolyn Kidd's life  became complicated after meeting the man of her dreams.  She met him over a year ago.
She saw him walking into the restaurant where she was drinking Cosmos, keeping her friend's company. In that second she fell in love with him. She took him home and slept with him. He leaves during the night without leaving his name or number. To her surprise he continues to appear to her at night. Gwen is too scared to talk to him and discovers that he may not feel the same way.
Gwen's life changes when a friend of her crazy sister Ginger knocks on her door and informs her that she will be in serious trouble if Ginger doesn't return the money.
Gwen decides to visit her sister's last boyfriend Dog, who is part of Chaos a biker's club. When she gets there she discovers that they are not a couple anymore but she also meets hottie number two, Tack, Chaos's president.  She finds him attractive and vice versa.
Once she gets back home, her mystery man is there, in DAYLIGHT! He is mad at her for getting noticed in the underworld of crime. She is not happy with his super alpha behavior and realizes that maybe she is wrong about him being her Dream Man.
Cabe "Hawk" Delgado is super pissed at Gwen. He is trying to keep her safe and has had her under surveillance for a while.  He knows her sister is trouble and on top of that, Tack has noticed his woman. To makes matter worse, we meet Mitch, good cop, and hottie number three who throws his hat in, on the fight for Gwen's attention.
Can Gwen survive the mess her sister placed her in? Can she survive Hawk? Yes he is Hot, but he is also bossy, arrogant and exasperating at times.


I enjoyed this book, many funny parts. I liked that Hawk had nice competition. Both Mitch and Tack were good to Gwen. Tough choice for a lucky girl. Elvira as a secondary character is too cool.
4/5 Fangs