Some Kind of Wonderful by Sarah Morgan 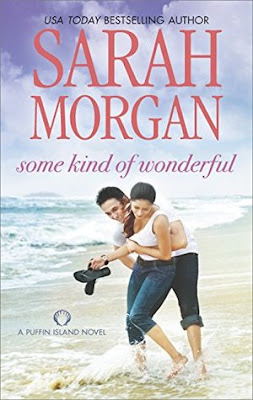 USA TODAY bestselling author Sarah Morgan will sweep you away with her Puffin Island series! In a town where anything can happen, sometimes love can be found in the most unlikely place of all…

Her whole life, Puffin Islander Brittany Forrest has dreamed of adventure. And at the age of eighteen, she thought she'd found it in bad boy Zachary Flynn. But after just ten tempestuous, smoldering days, their whirlwind marriage went up in smoke, and Brittany resolved to put him out of her mind forever.

Zach knows he let Brittany down, but being back on Puffin Island and seeing Brittany again stirs up long-buried emotions. This daredevil pilot has never felt worthy of her, yet he can't stay away even when he knows the chemistry between them will only complicate his life.

As long, hot summer days on the beach dissolve into sultry, starry nights, Brittany and Zach find that the sparks between them are more powerful than ever. Could it be that the second time around, their dreams of a happy-ever-after will finally come true?

Brittany Forrest and Zachary Flynn had a marriage which lasted less than a week. They were young and Zach was not ready to commit. The first chance he got, he was out the door. This forced Sara to reconsider her future. She went to college and then became an archeologist. Her latest excavation was in Greece, where she sustained a fall and broke her wrist. She is back home to heal. Puffin Island would always be her home.

Zach had a tough upbringing. He detached himself from feelings. He didn't want to trust anyone and chance getting hurt in the process, but things change when the camp guide Philip takes a moment to try to figure him out. He discovers that flying is his passion and now ten years later, he owns his own private plane. He's also back on the island trying to help a now, sick Philip.

This is Brittany and Zach's second chance. Their chemistry is still there and if they can figure out what when wrong this time around, they might be able to find their happy ending.

Sweet story with great characters. I liked Sara. She was honest, likable and she had a good heart. She was mature and she knew Zach needed time to trust her.

Zach had major issues. He was guarded and he refused to admit that anyone could care for him. My favorite part of the book and the reason Zach won me over was when he took care of Jaws. I might have smiled like a fool reading it.

Puffin Island is a great place to fall in love, just don't get your heart broken or you'll find yourself being the owner of a sympathy casserole. The town loves gossip, but they are also extremely protective of their inhabitants. Once you are accepted into their fold, you are set for life.

I'm excited about the next couple. Sparks are already flying!

A complimentary copy was provided by the publisher in exchange for an honest review.
Posted by MrsLeif at 12:03 AM