Something Like Love
Heart of the Rockies #2
by Sara Richardson 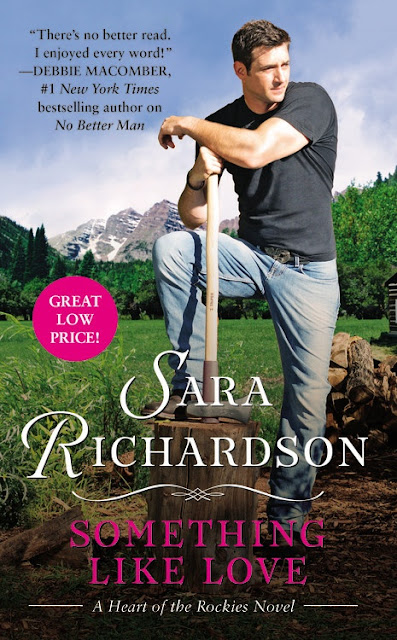 Something Like Love by Sara Richardson
Release Date: October 27, 2015
Forever Mass Market
Heart of the Rockies #2

IT'S GONNA BE A WILD RIDE

Ben Noble needs to do some damage control. Fast. His heart has always been in ranching, but there's no escaping the spotlight on his high-powered political family. Now the only thing that can restore his reputation is a getaway to the fresh air of Aspen, Colorado. Not to mention that the trip gives Ben a second chance to impress a certain gorgeous mountain guide. But Paige Harper is nothing like the shy girl he remembers . . . she's so much more.

Paige is serious about Ben, too: seriously annoyed that the playboy cowboy is using her mountain for his PR. Once upon a time, she fell for Ben's aw-shucks charm, but the fairy tale didn't end happily. Paige doesn't intend to let down her guard again. But keeping their relationship all business and no pleasure may be harder than she thinks-especially if the moonlight, the Rockies, and a certain irresistible rancher have anything to say about it...

After his ex-girlfriend makes him look bad in front of the media, Ben Noble needs a new plan. He's running for senator and in order to keep his numbers up, he's going to donate his land in Aspen and make a production of it. He's going to need the help of his friend Bryce and his attractive mountain guide, Paige Harper. Paige has been on his mind since the moment he met her and danced with her. Maybe this time he can convince her he's not playing her.

Paige can't believe Ben is back. He made her feel things she doesn't want to feel, like her heart racing and blushing any time he's around. She is good at what she does but her job is on the line this time. She has to impress her boss and Ben's entourage but his mother is not making things easy for her.

I liked both Ben and Paige.

Paige was determined, strong-willed, but at the same time she had a soft spot of vulnerability. She was hurt before and she didn't want someone taking advantage of her again. I can't blame her for guarding her heart.
Her relationship with her family was also not the best but I was glad to see in the end things work out. Sometimes bad things have to happen to unite us.

Ben was a good guy. Yes, he was a player before but he was serious about wanting something more with Paige. I was glad to see he defended her from his mother. He was not perfect, he made mistakes but he recognized them and asked for forgiveness.

In regards to the secondary characters, I loved Julia. I can't wait to read her story!

His hand latched on to her arm. “One date. That’s all I’m asking for.”
No, no, no. Don’t touch me. Don’t make me want something I can’t have.
“Ben.” She sighed. Leave me alone didn’t sound nice. And he thought she was nice. As much as he was mistaken, she hated to burst that particular bubble. It was a rare occasion that someone thought she was nice.
He stepped closer. Too close. “One date. Three hours. What are you afraid of, Paige?”
“That’s a complicated question,” she whispered because that was all she could manage. Her lungs squeezed. She couldn’t tell him the truth. She was afraid once he saw past everything, he wouldn’t like what he found. Just like everyone else.
But he didn’t back off. He didn’t move away. He stared at her until the world fell silent, until his gaze fell to her lips. She knew he would kiss her before his lips pressed into hers. She knew, but she didn’t back away, either. Her heart pounded so hard it ached and when his lips were finally on hers, she kissed him back, letting her knees go weak, letting her herself sink into him, letting go.
And he knew where to take her. Holy shittles, he knew. His strong hands caressed up her back and gentled into her hair. His soft, warm lips pried hers open, shooting bursts of warmth down her arms and legs. Something in her chest unlocked and she opened her mouth to him, let his tongue stroke hers. And it was a good thing he was so solid and sure because she wouldn’t be able to stand if she wasn’t leaning against him.
His lips moved over hers, slow and sensual, with a reverence no one had ever offered her. And it was so different, the places he was taking her, so open and giving, demanding nothing for himself. Her body responded to his with a shuddering gasp that made her want to give him more, everything. Chest heaving with a stifled breath, she glided her tongue along his lower lip, then bit down on it lightly.
His low groan lured her hands to his chest. They slid down, feeling the solid muscle under his shirt. Warm satisfaction filled her body to the point of brimming over as a sensual desperation flickered in his movements, making them faster, harder. His tongue mingled with hers, loosening her control, only proving the theory that one kiss could lead to so much more. He could give her more. So much more, judging from the way he seemed to know exactly what she wanted . . .
A foreign sound froze her. Her hands gripped Ben’s shirt as she strained her ears.
Moose. Barking. Somewhere close by. Which meant Bryce wouldn’t be far behind.
“Paige?” her boss called.
Bryce!
She jerked back and shoved her hands into Ben’s chest so hard, he stumbled backward into the feed buckets. Everything clattered as he fell, landing right in a pile of horse oats.
“Paige?” Bryce yelled again. “What the hell?”
Moose bounded into the stables and launched himself at Ben, smothering him with happy kisses.
Eyes wide and bewildered, she looked down at him, still crumpled on the ground, trying to wrestle the dog away as he laughed his ass off.
Oh, no. She squeezed a hand over her mouth, face pulsing with a scorching heat. Her shaking hand reached up to smooth her hair, sure that somehow the evidence of that kiss was all over her.
“What’s going on?” Bryce demanded as he jetted through the stable doors.
“Ben fell,” she blurted out. “He was helping me put stuff away and he . . .”
“Tripped over my own feet.” Eyes watering from the laughter, he pushed Moose away and stood, brushing himself off.
The dog tore away and disappeared from the stables like he’d caught some juicy scent. “Some things don’t change. I’m still a klutz. Remember when I fell down the steps at the old frat house? Broke my arm?”
Bryce eyed him with suspicion. “As I recall, that was because you’d consumed about half the keg.”


He grinned at Paige. “Beer was definitely not my problem today.”

And don’t miss the Heart of the Rockies holiday novella ONE CHRISTMAS WISH, on sale in e-book November 3! 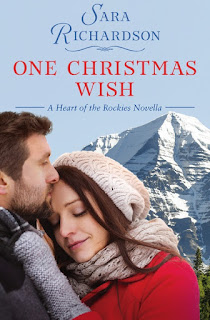 'TIS THE SEASON FOR SECOND CHANCES . . .
There's nothing like a Christmas wedding to warm a girl's heart-or to distract everyone else from the fact that one particular bridesmaid intends to quickly skip town. Julia Noble's accident was years ago, and she's tired of being overprotected. She needs to be on her own. But before she flees Aspen, Colorado, Julia wants to make sure her brother has the perfect wedding and all her ducks are in a row. Yet duty soon turns to pleasure when three days before the big day Julia runs into the only man she ever dreamed of marrying.

Fresh out of the navy, Isaac Nash just wants to feel normal again. But starting his new life means winning back the girl who captured his heart years ago. Isaac didn't know the truth behind the tragedy that changed Julia's life forever, and he can't stop blaming himself for not being there for her. After all this time, he knows that Julia is what he wants, this and every Christmas. Now Isaac just has to convince her that she's earned a miracle, too . . . 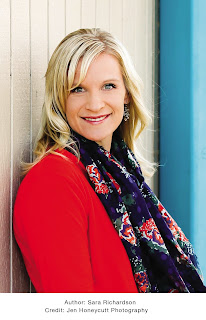 Sara Richardson grew up chasing adventure in Colorado's rugged mountains. She's climbed to the top of a 14,000 foot peak at midnight, swam through Class IV rapids, completed her wilderness first-aid certification, and spent seven days at a time tromping through the wilderness with a thirty-pound backpack strapped to her shoulders.

Eventually, Sara did the responsible thing and got an education in writing and journalism. After a brief stint in the corporate writing world, she stopped ignoring the voices in her head and started writing fiction. Now, she uses her experience as a mountain adventure guide to write stories that incorporate adventure with romance. Still indulging her adventurous spirit, Sara lives and plays in Colorado with her saint of a husband and two young sons.

Email ThisBlogThis!Share to TwitterShare to FacebookShare to Pinterest
Labels: Review Heart of the Rockies, Sara Richardson, Something Like Love