Stroke of Midnight by Lara Adrian

We are so excited to bring you the Release Day Launch for Lara Adrian's STROKE OF MIDNIGHT! STROKE OF MIDNIGHT is a Midnight Breed Series Novella brought to you by 1001 Dark Nights. Be sure to grab your copy of this sexy novella today! 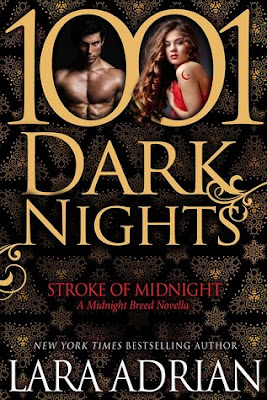 Midnight Breed Series Novella Born to a noble Breed lineage steeped in exotic ritual and familial duty, vampire warrior Jehan walked away from the luxurious trappings of his upbringing in Morocco to join the Order’s command center in Rome. But when a generations-old obligation calls Jehan home, the reluctant desert prince finds himself thrust into an unwanted handfasting with Seraphina, an unwilling beauty who’s as determined as he is to resist the antiquated pact between their families. Yet as intent as they are to prove their incompatibility, neither can deny the attraction that ignites between them. And as Jehan and Seraphina fight to resist the calling of their blood, a deadly enemy seeks to end their uneasy truce before it even begins….

She didn’t know the exact moment when the air between them changed from simply hot and playful to something darker. Something so fierce and powerful, it made all of her nerve endings stand at full attention. Jehan wanted her. She’d have to be an idiot not to realize that. She wanted him too. And she was too smart to think for one second that he hadn’t picked up on her staggering awareness of him as a man. As a dangerously seductive Breed male who could have her carotid caught in his teeth just as swiftly as he could have her legs parted beneath the driving pound of his muscular body. Sera swallowed hard, her breath and heart racing as she slowed to a stop before him. She glanced down, to where she was tethered to his strong hands by the unraveled length of red silk. Although she was covered where it counted, there wasn’t much of her dress left. Most of it lay on the floor at her feet; yards of scarlet pooled in the scant space between her body and Jehan’s. She licked her lips as she struggled for words. She should tell him to go, but everything female in her yearned for him to stay. She was no trembling virgin, no stranger to sex. But never with a Breed male. And the electricity that crackled to life between Jehan and her was something she’d never felt before. It was arresting. Consuming. Terrifying in its intensity. Yet it wasn’t fear of him she felt when she held his piercing light blue eyes. It was fear of herself and of the way he made her feel. Fear of the things he made her want. “Jehan, I...” She shook her head, unsure what she meant to say to him. Leave? Stay? Forget the fact that neither one of them had come to this place willingly, nor intended to walk away from the archaic tradition with a blood-bonded mate? But that’s not what this moment was about. What she saw in Jehan’s amber-swamped gaze right now didn’t have anything to do with their romantic surroundings or the expectation and hopes of their families. The things she was feeling had nothing to do with any of that either. It was desire, pure and simple. Immediate and intense. Her body throbbed with it, longing pounding furiously in her breast and stirring a molten heat in the center of her. She drew a shallow breath—then held it tight as Jehan reached out to caress her cheek. His warm fingers felt hard and strong against her face, but he stroked her with such tenderness, she couldn’t hold back the soft moan that spilled past her lips.