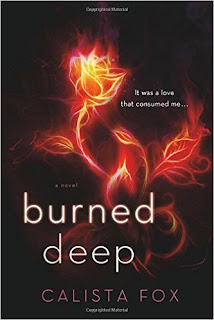 BURNED DEEP was fantastic.  I was pleasantly surprised with the whole story and I’m dying for more.

Dane Bax is a billionaire opening a new elite hotel called 10,000 LUX.  Female name is an events coordinator slowly making her way to the top of her profession.

When Dane sees her he instantly knows he has to have her, as the executive events coordinator of his hotel, and in his bed.  He knows she’s unlike anyone he’s met before and he wants more than just a night, but FEMALE NAME doesn’t do relationships.  She’s seen the disastrous relationship between her parents and grandparents, and she never wants to set herself up for that.

Slowly, Dane wears her down and she agrees to be his, but someone is trying to sabotage his hotel and hurt his girl.  Dane will stop at nothing to keep both of them safe.

Burned Deep kept me on the edge of my seat.  Calista Fox’s writing was entertaining and fast.  Once I read the first chapter I couldn’t put the book down. I had to know what was going to happen.

I have to say though, that while this book did NOT have a cliffhanger… it does leave you dying for more. I’m so very excited for the next book to be released.

If you’re looking for an extremely entertaining story, with hot, steamy scenes, a bit of suspense and alpha character you HAVE to pick up BURNED DEEP

Posted by MrsAlcide at 9:41 AM