The Christmas Cottage / Ever After
by Samantha Chase 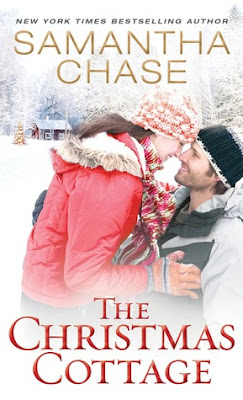 Legend has it that any couple who spends the night in the Christmas Cottage shall have love everlasting...
THE CHRISTMAS COTTAGE
Lacey Quinn does not believe in happily-ever-after or the legend of the Christmas Cottage. But her best friend does, and she’s the one getting married. It’s Lacey’s job to make sure everything at the cottage is perfect for the newlyweds. Instead, she finds herself snowed in with the best man, and she begins to wonder if fairy tales really can come true.


EVER AFTER
Ava Callahan wants desperately to believe in love everlasting. But when Brian McCabe walks back into her life and upsets her carefully organized world, her commitment to perfection makes it hard to accept the love that’s right in front of her. Will it take a night in the Christmas Cottage for Ava and Brian to find their happy ending?

Samantha Chase brings two stories in one book.
The first half of the book is dedicated to Lacey and Ean. The last half is about Ean's sister Ava and Brian.

Lacey Quinn is either on the verge of becoming crazy or killing her best friend Ava. Ava is planning her wedding and she has turned into a bridzella. As the maid of honor, Lacey is asked to decorate Ava's family cottage home into the perfect place for the couple's wedding night. Lacey knows the cottage is felt to be magical and any couple who spends the night together there will have everlasting love. Lacey doesn't believe it but she can't tell that to Ava. When she finally makes it to the cottage the last thing she was expecting was to find Ava's brother Ean, her secret crush, there too. Lacey tries to make him leave but a snow storm interferes and what do you know? maybe the cottage is a magical place after all.

I really liked Lacey and Ean together. They just fit perfectly. She has loved him since she was a teenager and now that they are both adults Ean is able to return her affections.
My one complaint would be that it felt too rushed for Ean to fall in love with Lacey.

Eight months have passed since Ava made a decision which impacted her life. She's living with it and sometimes she's tired of sensing the pity she inspires in other people. She almost made a huge mistake but Brian McCabe was there to stop her.

Brian has given Ava the time she needed to deal with the events of months passed but now he's done waiting. He wants her to give him a chance at making her happy.
Ava knows Brian is the one but maybe a night at the cottage will solidify their relationship. She only needs to convince him to go with her....

I was disappointed in Ava. She was a character I didn't like in The Christmas Cottage. To me, she was selfish and annoying. Brian, on the other hand, was patient and sweet. I was hoping Ava would grow as a character after all that happened before but she didn't in my eyes. Nevertheless, even though I was not crazy about her I didn't like how dismissive Ean was about Ava's wishes in regards to the cottage.