Touch Me Not by Apryl Baker 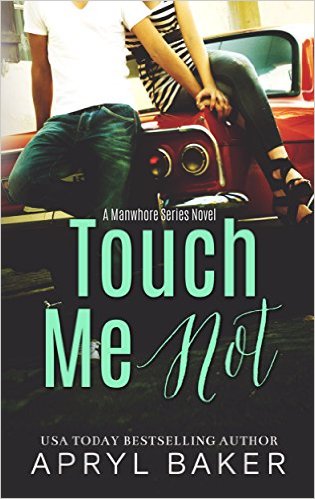 Since the death of her twin sister, Lily can’t bear to be touched. Not accidentally, not casually…and certainly not intimately. This makes it impossible for her to confess to her best friend Adam Roberts that she’s in love with him. She can’t give him the sort of relationship he needs, so she watches in silence while he plans his wedding with someone else.

Nikoli is a self-proclaimed connoisseur of women, and he wants to add Lily to his list of conquests, but she wants nothing to do with him—until he makes her an offer she can’t refuse. He’ll teach her to enjoy human contact again, giving her a chance to win over Adam, while Nikoli uses all his considerable charm to seduce her.

But Lily raises the stakes…

Lily loves cars. Her late father was a racer, and she grew up under the hood of a car and on the racetrack. Nikoli has a limited edition 1970 Plymouth Barracuda she covets, so she informs him the terms of their deal also require he not sleep with anyone for six months. If he does, she’ll win the car. If she surrenders and ends up in his bed, his beloved ’Cuda is his to keep.
In an intricate dance of control and surrender, a reluctant friendship becomes something more. Lily begins to crave things she never believed she could, and Nikoli realizes there is more at stake than his reputation.

If Lily overcomes her phobia, will she crave Adam’s touch as she’s starting to crave Nikoli’s? Or will she only find pleasure from the touch of a semi-reformed manwhore? 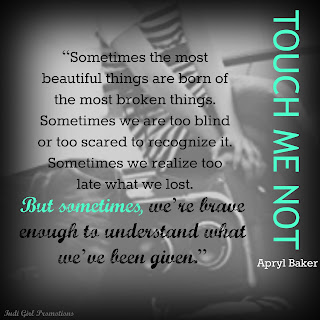 Nikoli likes sex with no strings attached, he makes his intentions clear and isn't sorry about it. When he sees Lily he must have her in his bed, but what he doesn't count on is coming on to her and being completely rebuffed. He's never flirted with a girl before only to be rejected, she must be playing hard to get and it spurs something in him. Lily is the sweetheart on campus. She helps tutor the entire football team and now they feel the need to protect her. She is hopelessly in love with her best friend Adam, so of course when manwhore Nikoli hits on her she isn't into it. She knows who he is, she's helped heartbroken girls get over him, and she won't fall for that trap. The only problem is that he won't relent. He asks for one date. Just one and then he says he'll leave her alone if she still wants him to. One date sparks a deal. Nikoli puts it on the table and Lily accepts.

"Lily is the best thing that'll ever happen to you, but by the time you figure it out, she'll be gone."

He starts helping her with her phobia and slowly the trust between them builds. She wants to make Adam realize she's the one for him and also be able to give him everything he deserves and that includes being able to touch her. But as time passes her relationship with Adam starts to break while the one with Nokoli starts becoming so much more.

This story starts off with two characters who you think can't be any more opposite from each other, the Manwhore and the Prude. The thing is they have more in common than either of them know. He's been burned in the past and for a long time now has refused to let any woman close to him, if only to save himself the heartache, but Lily gets through. Somehow Nikoli shows Lily the true him, his caring, and selfless side. He earns her trust by being there for her when she needs to him. He takes her condition completely serious and sincerely tries to help her even though he has his ulterior motives. The thing is he's made those motives completely clear. Through all of that they become inseparable and Lily can't help but develop serious feelings for this Manwhore. She knows exactly who he is and she doesn't want anything from him, she just wants him.

I love their banter, they were both very cheeky at times. Through all of that I also loved all the mystery shrouding the story with the everything happening in the area. The Russian endearments made my heart melt. They made Nikoli so very sexy. I mean who doesn't love to be referred to as sweetheart in another language. I really enjoyed reading Lily and Nikoli's journey. I might be wanting a sequel?

So who am I? Well, I’m the crazy girl with an imagination that never shuts up. I LOVE scary movies. My friends laugh at me when I scare myself watching them and tell me to stop watching them, but who doesn’t love to get scared? I grew up in a small town nestled in the southern mountains of West Virginia where I spent days roaming around in the woods, climbing trees, and causing general mayhem. Nights I would stay up reading Nancy Drew by flashlight under the covers until my parents yelled at me to go to sleep.

Growing up in a small town, I learned a lot of values and morals, I also learned parents have spies everywhere and there’s always someone to tell your mama you were seen kissing a particular boy on a particular day just a little too long. So when you get grounded, what is there left to do? Read! My Aunt Jo gave me my first real romance novel. It was a romance titled “Lord Margrave’s Deception.” I remember it fondly. But I also learned I had a deep and abiding love of mysteries and anything paranormal. As I grew up, I started to write just that and would entertain my friends with stories featuring them as main characters.

Now, I live Huntersville, NC where I entertain my niece and nephew and watch the cats get teased by the birds and laugh myself silly when they swoop down and then dive back up just out of reach. The cats start yelling something fierce…lol.
I love books, I love writing books, and I love entertaining people with my silly stories.

Touch Me Not Blog Tour 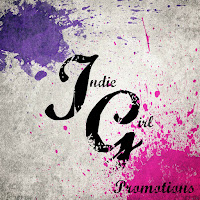 Email ThisBlogThis!Share to TwitterShare to FacebookShare to Pinterest
Labels: Review Apryl Baker, Review, Touch Me Not