Kissing Her Crazy by Kira Archer 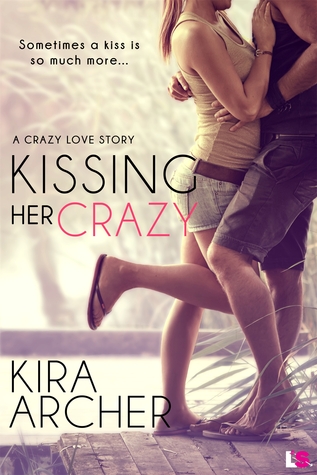 Single mom Lena Oserkowski just wants to relax at the 5-star resort where her brother is getting married. Oh, and figure out how to make one of her businesses successful enough to support her son. Her focus is thrown out of whack when Elliot Debusshere, twin brother of her new sister-in-law, swims to her rescue at the hotel pool.

Elliot is disillusioned with his wealthy, playboy lifestyle and wants nothing more than to bring some meaning and purpose to the charity he runs. When he rescues Lena from a case of heat exhaustion and meets her son Tyler, he has no idea the answer to his problems might have just fallen in his lap. Literally.

With Lena's ideas and Elliot's know-how, they might just be able to make their ventures a success. Except pleasure has a sneaky way of mixing with their business, leaving both dazed and confused. Charming as he is, Elliot isn't father material. And there's no room for a single mom and her child in his life. While the attraction between them isn't easily squashed, there's no telling the lengths his family will go to prevent a relationship.

He rescues her from having to jump in the pool to pull out her son, Tyler. It's the first time Lena and Elliot are meeting and there's an instant attraction. Lena has heard plenty about Elliot's wild ways, since he's her soon to be sister-in-law's brother. She knows to stay away from him but it's very hard since her son, Tyler, has taken an instant liking to him. Not only that but Elliot wants to spend time with her and won't seem to give up. When he finally gets her alone he asks for her help and they seem the make a great team. She helps him with his family's charity and he'll help her get one of her ideas off the ground. It's only been a few days but they can't seem to stay away from each other. Lena doesn't do flings but they're at a tropical resort and sexual tension is at an all time high. She gives into temptation and dear lord is it hot! One night doesn't seem to be enough and soon, too soon, feelings become involved. The only problem is that in a few days they'll both be going back to their regular lives.

Lena is great! Walking around with her fanny pack and homemade concoctions, not caring what anyone thinks of it. Elliot is hot! And sexy! He's so adorable while initially trying to interact with six year old, Tyler. He definitely has no idea what he's doing when it comes to kids but tries his hardest because isn't that one of the ways into a woman's heart? Tyler reminds me of my nephew. Always trying to get away with things that he isn't normally allowed to do, or eat! Lena and Elliot are so different yet come together beautifully. This is very cute and short read, with plenty of sexy time to spice things up.