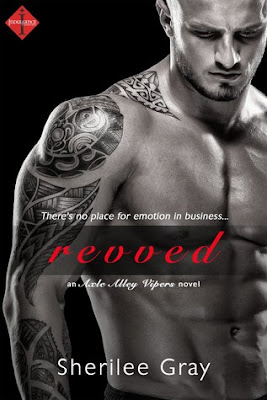 He'll rev her up and drive her to the edge...Rusty West swore she was done with men. Instead, she channeled her passion into West Restoration, the car shop she runs with her sisters. But Rusty's aloof composure fades when the owner of the competition comes striding into her shop, over six feet of sexy, rough-edged confidence…hot enough to send Rusty's motor into overdrive.Reid Parker worked his ass off to get what he wants—and what he wants is West Restoration and its crew. He never expected to find a shop of all-female mechanics…or the stunning redhead who ignites a lust that threatens his cool. But Reid plays carefully. He never, ever gets involved with a woman beyond one night.And no matter how hot the sparks, Rusty will never compromise her business for a man…

Rusty West is one of the owners of West Restoration. Her business partners are her sister Piper and her best friend Alex. She's a mechanic and she loves what she does. She is happy with her work but she stays away from relationships. She doesn't date. The last time she did, she was humiliated. Men are not for her.

Reid Parker is the owner of R.I.P. Classics and he doesn't like the competition stealing his car jobs. He has to nip it in the bud. He's determined to give West Restoration owners a run for their money. To his shock, the smoking hot red-head woman working on the car is not what he was expecting. It takes him just a few minutes to decide he wants their company and the woman under the hood.

I didn't read the first book in the series. It's Alex's book but, now I know I have to go back and fix this oversight.
I liked both Rusty and Reid. They were great together. Their banter was hilarious and their sexy times were smoking! Rusty deserved someone who treated her right after her heart was broken by a moron. Reid had his own drama to deal with but it played just the right way for me not to hate him.

Piper has already showed me she's a good sister and a feisty one. She is going to give Cole a run for his money.

A complimentary copy was provided by the publisher in exchange for an honest review.
Posted by MrsLeif at 9:00 AM