How does your mind move on from someone your soul can't seem to forget? How can your heart resist a love that never fully came to be?
Ten years. It's been ten years since Hailee saw Corwin Rogers. In person that is, because despite their lack of physical contact, Corwin's gorgeous face has plagued her dreams all this time. In its most idle hours of the night, her mind always reverts back to the image of the teenage boy she loved in secret years ago. They were classmates for four years, forging a limited friendship within school grounds and occasional parties, but they also shared a unique bond over their struggles. Hailee never told him how she felt, and she wasn't sure if the feelings were reciprocated, but she always wondered. How could she not when he shared so much of himself with her and only her? Seeing him a decade after their high school graduation presents the two with another fateful opportunity to be everything for one another. Hailee starts to consider that her inexplicable dreams actually mean something, and that her ties to Corwin are stronger than she ever allowed herself to believe. But after years of separation, their chance at happiness is challenged by secrets from their time apart. When the truth emerges, colliding pasts and futures, Hailee and Corwin have to decide if they truly are perfectly aligned. 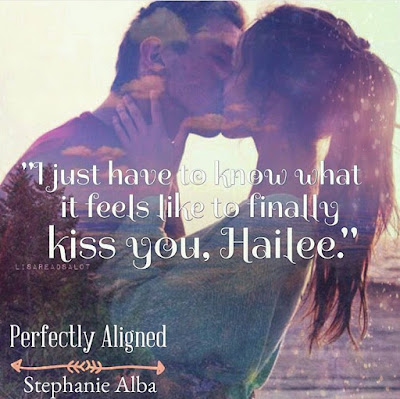 “Hailee? Is that you?” he asked in a shaky voice, as though he couldn’t trust the sight before him.  Corwin’s deep voice sounded loudly in my ears despite the coolness it carried. It sounded the same, yet different. Its tone and husk reminded me of all our past moments, of the way I would rise and also fall apart when he called my name all those years ago. But it also possessed an unfamiliar maturity and maleness that made blood rush into my cheeks and heat reach my ears. With my heart racing, I realized I had no choice but to turn around and see him.
“Hey!” I said as I turned around and met those same olive eyes that haunted my idle mind at night. My tone implied that I was oblivious to who was behind me, but my heart knew. It was beating harshly, banging against my lungs so convulsively it made my chest ache and breathing short. He looked even better up close, and his smile grew wide upon visually confirming that it was indeed Hailee Samuels he was speaking to. College had certainly changed him. His life during our time apart had shaped him into the man before me, one I didn’t know, but badly wanted to. Muscles drew lines across his taut shirt with short sleeves that revealed a peek at his sturdy biceps. Faint stubble lined his sharp jaw making him seem more dangerous and beautiful than the clean-shaven boy I remembered. Corwin’s dark brown hair was longer and straight, pointing in all directions, and it made me wonder if it was something he worked on meticulously or if it was a perfect, sexy bed-head he simply woke up with. I became aware that time was passing in silence as we both took each other in.
“It is you,” he whispered, his eyes opening wide. “It’s been years. How are you?” Surprising me, he came in for a hug before I could protest. Of course, I was sticky and sweaty, and he smelled wonderful, like evergreen trees covered in dewy raindrops. I missed the new scent the second he pulled away.
“Yeah,” I said, feeling inept. “It’s been almost ten years. I’m great. How are you doing?”
“Great. I moved back home two months ago and live about twenty minutes from here. Are you local?”
While he awaited my response, Corwin studied me. He looked at me from head to toe, glancing up and down repeatedly with a tenacious intensity. His eyes trailed over my tight yoga pants and fitted top, making me blush even though I was proud of my physique. I wasn’t offended by him looking at me. Actually, it was fantastic, and my enthusiastic acceptance of it was certainly a side effect of my dream from that morning. Even then I felt turned on just by his gaze, only to have it fueled by his next words.
“You look incredible … like, really good.” He spit it out before I could answer his question and coughed after as if the words had forced themselves from his throat. I didn’t think it was possible for my cheeks to burn more.
“Thanks …” I mumbled with a sudden shyness. “I live in Shoreline, so yeah, I’m local.”
“That’s great. I’m so glad to see you.” His voice sounded genuine and filled with interest. Corwin looked me in the eyes and held my gaze. He seemed lost in so many thoughts, piquing my curiosity and I blinked a few times before he caught himself staring. Then he added, “Listen, I have to go see my dad, but I’d love to catch up for lunch or something soon.”
“Yeah, that’d be great,” I said, trying not to take him too seriously, but allowing my intrigue to get the best of me. I couldn’t help but be curious as to what that man from my dreams and the boy from my past had been up to all those lost years.
“Here, give me your number and I’ll call you so we can figure something out.” He was serious, handing me his phone so I could punch my number in. When I handed it back, he called me immediately so that I’d have his contact information on mine. Or perhaps he was testing to see if I gave him my actual number, because when my phone rang in my purse he smiled as if filled with relief.
Corwin pulled me in for another hug, one I permitted myself to savor, and then he rushed off. Squinting back once more before leaving the market, his expression demonstrated complete disbelief at our encounter; I felt rather the same. He left me clutching my sunflowers and wondering if that had really just happened. In the four years I knew and adored him, he’d never asked for my phone number, and after my dream and that meeting, I had no control over thinking about him for the rest of the day.

Stephanie Alba has wanted to write for as long as she can remember. Writing was always a way to express herself, as well as an escape. In August of 2014, Stephanie decided to start writing a story that she dreamed about. At first it was just something fun for her to do, a way of keeping her sanity during her first year as a stay at home mom. Over the months she couldn’t stop writing and that’s where For Both Are Infinite came along. Rhys and Ellie’s story was hard work, but it allowed her to fulfill the goal she’d always had of writing a novel. Before becoming an indie author, Stephanie taught high school English. Now she is a stay at home mom to the happiest baby ever, a wife to an amazing husband, and a graduate school student. She also hopes to continue writing. When she’s not glued to her laptop or with a notebook in her hand, she’s swimming, running, reading or chasing her toddler. Stephanie is currently working on her second novel, a friends to lovers story set in Washington state. It is set to release during fall 2015. She also plans on writing more of Ellie and Rhys’ story, as well as stories focusing on other characters you meet in For Both Are Infinite.