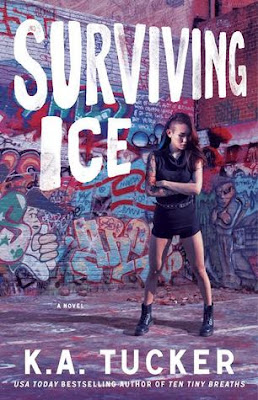 Ivy, a talented tattoo artist who spent the early part of her twenties on the move, is finally looking for a place to call home. She thinks she might have found it in San Francisco, but all that changes when she witnesses a terrible crime. She’s ready to pack up her things yet again, when a random encounter with a stranger keeps her in the city, giving her reason to stay after all.


That is, until Ivy discovers that their encounter wasn’t random. Not at all

I was wondering who was going to steal Ivy's heart. She has always had this façade of being strong, independent and not easy to fall in love. The only man she has cared for was Jesse and their relationship was a short one anyway. Seeing her open up to Sebastian and making his frosty look crack wide open was awesome!


Ivy Lee is close to Ned, her uncle. She works for him at his tattoo shop and lives with him but he has made it very clear she won't pay rent.  For the first time in a while, she feels like she could stay in one place and set roots down. However, when he is murdered, she can't wait to sell the house and the shop and move away from all of it. That is until she meets Sebastian.

Sebastian works for the Alliance and his next assignment is to make sure they're no loose ends in regards to Ned's murder. If the only witness to the crime, Ivy, is a threat, he has to dispose of her too. Meeting her and realizing how alike they are makes him doubt his job especially when his boss might be hiding something too.

The story is full of suspense. Sebastian is determined to keep Ivy safe in any way possible and let me tell you, it's not easy to take him out. Ninja skills, that one.

I love that both characters have flaws and despite Sebastian's true job, I knew Ivy was always going to be safe with him.

K.A Tucker has once again completely blown me away with her flawless writing and magnificent world building.

Ivy is a bit of a nomad.  She doesn’t put down roots anywhere and doesn’t do relationships. When she’s back working as a tattoo artist in her uncle’s shop she witnesses a devastating crime.  Left in the aftermath of that, she has a few things to tie up before she’s on the road again.  But then everything changes when she meets Sebastian.

Sebastian is a bit of a mystery.  He’s sent on assignment to smooth over a “mess up” within his company when he meets Ivy.  She’s unlike anyone he’s ever met. She’s cold, unemotional, no-nonsense, and alluring.  The more time he spends with her the more he falls for her tough facade.  But how will she get over the lies he had to tell her?

SURVIVNG ICE contained everything I enjoy in a Tucker novel.  There was suspense, action, and unique characters with an intense connection between them.

I have to say that Ivy may be one of my favorite characters to read about.  She was edgy and fearless but still relatable.  She had a no-nonsense attitude that drew me in from the first page. When she meets Sebastian her walls slowly begin to come down which turns into something beautiful.

Their chemistry is seriously off the charts.  Being an ex Navy Seal Sebastian is extremely alpha and protective.  Combine that with Ivy not wanting protection and being independent calls for some humorous scenes.

If you’re looking for an extremely well written story, with complex characters and VERY HOT scenes, SURVIVING ICE is just for you.  I couldn’t flip the pages fast enough!

I am honestly devastated that this series is over.  K.A. Tucker has kept me completely captivated in this series’ stories that I could read them forever. But I have to say that I’m very excited that she’s on to a new book!