All I Want (Animal Magnetism #7)
by Jill Shalvis 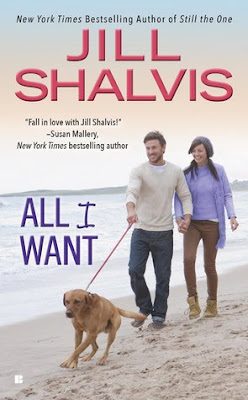 From the “awesomely, incredibly talented”* New York Timesbestselling author of Still the One, comes a sexy new Animal Magnetism novel set in Sunshine, Idaho, where the sky is the limit when it comes to love.


Pilot-for-hire Zoe Stone is happy to call Sunshine, Idaho, her home base. But her quiet life is thrown for a loop when her brother’s friend Parker comes to stay with her for a week. The U.S. Fish and Wildlife special agent is a handsome flirt with a gift for getting under her skin. And the situation only escalates when Parker hires her to fly him around the area while he collects evidence on a suspected smuggler.


Now she has to live and work with the guy. But when they’re in the air, she sees another side of him. He’s driven, focused, and sharp. And while he enjoys giving commentary on her blind dates, she quickly realizes with a shock that it’s Parker who gets her engines going…

Zoe Stone has decided to start dating. She's getting ready for her next blind date. Her sister is recommending she does something different with herself, to be spontaneous for a change. She decides, what the heck? Just be different. When a hot guy knocks on her door, she kisses him on the lips. Too bad the guy is not her blind date but her brother's friend, Parker, who's coming to stay with her as her new roommate. Insert awkward pause....

This is my first Animal Magnetism book and I think you don't need to read the others to enjoy this one.
Zoe was a darn good pilot and she has always been the mature, sensible sibling. She took care of her brother and sister while her parents remained clueless. Her brother Wyatt is happy with his girlfriend Emily and her sister Darcy is in love with AJ. They all make an appearance is this book (I believe both of this couples had a book already).
Zoe is a disaster at home. She has no idea how to fix the simple things that break in her grandparents home but she can fix a plane engine in a heartbeat.  Zoe is also the proud owner of Oreo, a rescued dog who's scared of men and other dogs. To Zoe's surprise, Oreo loves Parker from the get-go.

Parker is U.S. Fish and Wildlife special agent. He's on leave after being injured recently. Even though, he's supposed to be recuperating, he's investigating a criminal poacher. On his last mission they lost a man and Parker wants him behind bars. He was not counting on falling for his roommate, loving her dog, adopting two cats or fixing the house.

This book is exactly what you need to read when you want a feel good book. I love animals and the scenes with Oreo and the kitties were my favorites.
Zoe was sassy and Parker was sexy. Perfect combination!