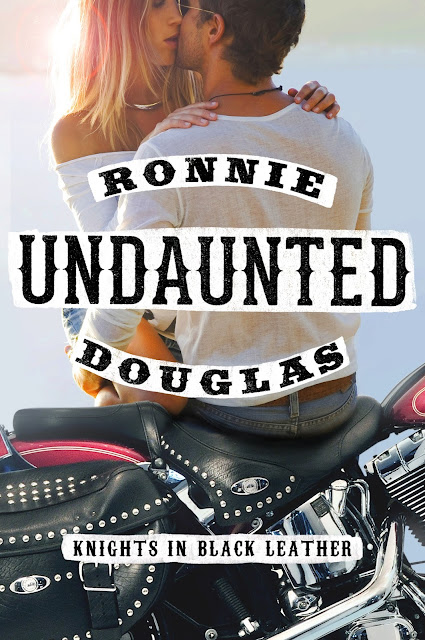 Being fearless has never looked so good . . .

Aubrey Evans needs to get her life back on track after her father is indicted for embezzlement. All she has to do to hightail it out of small-town Tennessee is save up money for college tuition and steer clear of hard-muscled boys on motorcycles. Yet there's no ignoring someone like Zion. A knight in black leather, Zion looks like every bad idea she's been told to avoid, but she can't resist him. Whenever she's in trouble, he's there. Appealing as his rough exterior may be, it's the protective, principled man beneath who tempts her like crazy.

Zion knows Aubrey doesn't intend to stick around. She claims to want only friendship, but he senses there's a naughty girl hiding on the inside—one whose intense desires match his own. For now, he'll be patient and play by her rules. But he knows it's just a matter of time before he weakens her resolve.

As they join forces to figure out who's behind a local crime spree, it's clear that the danger goes deeper than Aubrey guessed. And when she needs someone tall, dark, and undaunted to keep her safe, Zion intends to be there—now and always.

I was so excited to start and Undaunted and I have to say I was very pleased with it.  Undaunted isn’t your typical motorcycle club story, but it was thoroughly enjoyable throughout the whole thing.

Aubrey has always been a planner.  She knows what she wants out of her life and one thing she didn’t see coming was her family being torn apart by her father’s actions.  When she moves to her grandma to get her money sorted so she can go back to college, she doesn’t expect to get the attention of Zion, a member of The Southern Wolves MC.

Zion is always there when Aubrey needs him.  But his dangerous, criminal life is too much for her to handle.  Will Aubrey and Zion find the balance they need to try to make a relationship work?

For those expecting a traditional MC book this is not it.  It’s not dark or gritty; it’s actually the complete opposite.  Zion is unbelievable sweet with a dark reputation.  We don’t see any of the dark stuff from him and the story only alludes to his job.

I have to be honest that at the beginning I was a bit disappointed that it wasn’t a typical motorcycle club story.  I mean the cover alone is hot and shows hope for the alpha-masculine-MC storyline.  But once I got past that, I really couldn’t put the book down.

Aubrey was a bit harder for me to connect with.  I loved that she was confident with herself and she had a plan for her future, but I found some of her actions unnecessary and a bit annoying.  She obviously felt the strong connection to Zion and her reasoning to stay away from him made sense, but her actions didn’t.

I really enjoyed Ronnie’s writing and her characters banter.  It was so funny at times and a little hot!

Overall, if you’re looking for an entertaining story from the first page to the last you should check out Undaunted. Zion is amazing and you’ll fall for him immediately!

When Beau looked her way, she gestured toward a cluster of senior citizens. “Tell the girls to meet me in the kitchen. Might as well have tea if we’re already up.”

Then my grandmother walked toward the bikers, who were leaning on their motorcycles watching everything. They gave her the sort of look that made me think that they were watching approaching royalty. It was a mix between Southern gentlemanliness and the way a fighter acknowledges an equal.”
“If I were the sheriff I’d be sweating like a hussy in the Good Lord’s house right now,” Beau murmured from beside me.
When I looked his way, my confusion must’ve been obvious because Beau added, “Miz Maureen has influential friends. She doesn’t like to call on them, but she’s about fed up waiting on the sheriff. That man couldn’t find his ass with both hands and a map. Those boys there”—he nodded toward the street—“they get things done. Maybe not the way the law likes, but they get results.”
“So they’re not the ones doing this?”

Beau laughed. “Echo would dip a man in honey and stake him out for the bears to find if any one of them boys touched Miz Maureen.” Beau inclined his head toward the bikers who were talking to her. “Your grandmother has the ear of one of the most powerful men in the state. She doesn’t call on Echo for anything, so people forget that she could do so.”
“Oh.”

“Not a bad thing.” Beau patted my hand. “Eddie Echo would steal the stars out from under the angels themselves if Miz Maureen so much as hinted that her yard wasn’t bright enough.”
I followed his gaze. I couldn’t make out many details about the two men standing with my grandmother. They were both, obviously, riding Harleys. I didn’t know enough about bikes to be more specific than that. One of the guys lifted his gaze and looked my way. Dark hair brushed the edge of a black leather jacket. Strong jaw, sharp cheekbones, and a mouth that looked made for sin, he was the sort of contrast in beauty and danger that made me think there had to be a trick of light. No man looked that good. Even as I argued with my own perception, I could tell that he was near my age, fit, and held himself with the kind of restrained energy that made sane girls look away and unhappy girls want to step a bit closer. I told myself that I was sane, that I was going to look away any moment now, that I didn’t want to find an excuse to go check on Grandma Maureen.

“Ask your gran about Echo before you go staring at the likes of those boys,” Beau paused and then added, “I’m going to head inside.”

Music is how I get into any mood. Writing romance is part of writing most of my books, so I have a few years of trying out different strategies. Often, though, I just turn on my music and let go.  I don’t need a special room. In fact, for the sequel to Undaunted, I wrote the sexiest scene in the book while I was at a layover in Iceland.  It made me giggle out loud at one point to realize that I was in a lounge with all these businessmen in their suits, and I was curled up in a chair sipping my tea and writing a sex scene.
My default was Lana Del Rey, but I use music to tweak my moods, so depending on what mood I needed, I’d swap out to a specific song and just play that song on repeat for the emotion I needed to call up.  A few of the ones I used were:
a.    Beyoncé “Crazy in Love”
b.    Rihanna “Pour it Up”
c.     Rihanna “Rude boy”
d.    Missy Elliot “Get Ur Freak on”
e.    Leon Else “Cheap Hotel”
f.      Train “Bruises”
g.     Charlie Worsham “How I Learned to Pray”

Ha! I’m always baffled by this one. Riding is amazing. In four decades of life in which I’ve been on bikes, I’ve only ridden Harleys or Triumphs, so my answer is specific to those, not the other sort! The scenes where my characters are on a bike (which are in not only Undaunted and Unruly, but also in Graveminder and in my self-published book Unfiltered & Unlawful) are based on my own feelings.

There’s a freedom, an adrenaline rush, and a sliver of danger at being on a machine with that sort of speed and no real protection if you crash. There’s a connection between riders and machine that is greater than in a car (even a stick shift, which is what I prefer in cars).  There’s a connection between driver and passenger on a bike.  It’s like an intricate dance at times, but you are partnering with a man, a machine, and a road which hides threats.  It’s one of the things I love most.  (And, yes, there is a Harley in my garage.)

Posted by MrsAlcide at 7:49 AM