Wicked Ever After (Blud #4)
by Delilah S. Dawson 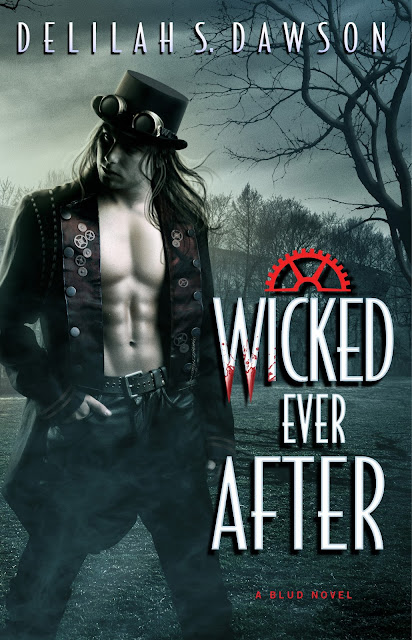 WICKED EVER AFTER by Delilah S. Dawson is the seventh and final installment in her highly praised steampunk-tinged “Blud” series of paranormal vampire romance, where romance returns to Tish and Criminy—but “happily ever after” is never ordinary in the world of Sang.

Ever since landing in the magical world of Sang and falling in love with dashing ringmaster Criminy Stain, Tish has been waiting for the axe to fall. Until her dying grandmother’s last breath on Earth, Tish can’t bring herself to give up her all-too human frailty and commit to life on Sang as a youthful, long-lived Bludman like her handsome husband. But when a peculiar twist of fate delivers Tish’s grandmother to Sang, an unexpected chain of events forces Tish and Criminy to embark on one last wild adventure. From old friends to new and into the lair of terrifying enemies, the couple’s love and longevity will be pushed to the brink by each harrowing encounter. Is blud thicker than blood, and can Tish and Crim find their wicked ever after?

Praise for the Blud series:
“Boredom can have really strange consequences, as Demi Ward is about to discover.  Rising star Dawson ventures back to the land of Sang in the third installment of her inventive steampunk vampire series.  The dark underbelly of life in the Paris cabarets is vividly explored as this stubborn heroine must deal with the fallout from her decisions.  Gritty, thrilling and sexy—Dawson is really on a roll!”
—Romantic Times, Four and a Half Star HOT on Wicked After Midnight

“Dawson has created one of the most original and refreshing worlds in a time when I thought it had all been done before…If you are not reading the BLUD series, you are missing out!”
—Under the Covers Book Blog on Wicked As She Wants

“Mesmerizing…holds the reader spellbound from its opening line until its last…This reviewer recommends you make a trip to the fascinating Sang immediately.”
—Bitten by Books on Wicked As They Come

Delilah S. Dawson is the author of Wicked After Midnight, Wicked As They Come, Wicked As She Wants, and three enovellas set in the enchanting land of Sang: The Mysterious Madam Morpho, The Peculiar Pets of Miss Pleasance, and The Damsel and the Daggerman.  She also contributed a story to the star-studded urban fantasy anthology Carniepunk.  Her novel for young adults, Servants of the Storm, is available from Simon Pulse.  She lives with her family in Atlanta.  To keep up with the latest news about Delilah and her books, delilahsdawson.com.