Before Tomorrow by Pintip Dunn 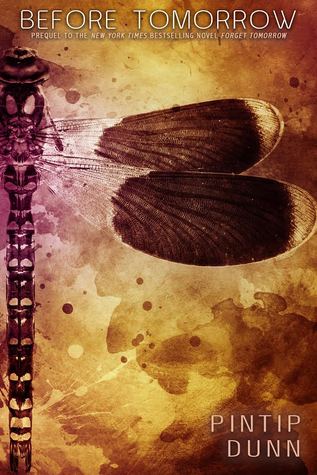 In a world where all seventeen-year-olds receive a memory from their future selves, Logan Russell's vision is exactly as he expects—and exactly not. He sees himself achieving his greatest wish of becoming a gold-star swimmer, but strangely enough, the vision also shows him locking eyes with a girl from his past, Callie Stone, and experiencing an overwhelming sense of love and belonging.

Logan’s not sure what the memory means, but soon enough, he learns that his old friend Callie is in trouble. She’s received an atypical memory, one where she commits a crime in the future. According to the law, she must be imprisoned, even though she's done nothing wrong. Now, Logan must decide if he'll give up his future as a gold-star swimmer and rescue the literal girl of his dreams. All he'll have to do is defy Fate.

The novella is written from Logan's POV. It starts from the moment that he turns seventeen and his future memory is given to him. In the memory, he realizes he will be a gold star swimmer but also he sees Callie in his future, the girl he hasn't spoken to in six years.

Logan also has to deal with his feelings about his future memory and his parents learning about it. He believes his father wouldn't have been happy if the memory wasn't a successful one.

I was excited to read Logan's POV. It shows how much he cares for Callie and how guilty he feels about what he let happened to his brother.  This only makes me more excited about the next book in Forget Tomorrow series.