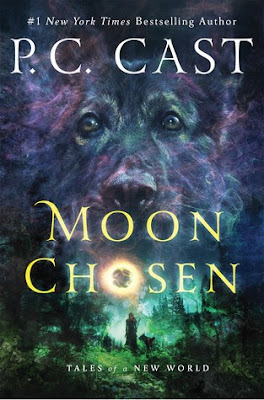 #1 New York Times bestselling author, P.C. Cast, brings us a new epic fantasy set in a world where humans, their animal allies, and the earth itself has been drastically changed. A world filled with beauty and danger and cruelty…

Mari is an Earth Walker, heir to the unique healing powers of her Clan; but she has cast her duties aside, until she is chosen by a special animal ally, altering her destiny forever. When a deadly attack tears her world apart, Mari reveals the strength of her powers and the forbidden secret of her dual nature as she embarks on a mission to save her people. It is not until Nik, the son of the leader from a rival, dominating clan strays across her path, that Mari experiences something she has never felt before…

Now, darkness is coming, and with it, a force, more terrible and destructive than the world has ever seen, leaving Mari to cast the shadows from the earth. By forming a tumultuous alliance with Nik, she must make herself ready. Ready to save her people. Ready to save herself and Nik. Ready to embrace her true destiny…and obliterate the forces that threaten to destroy them all.

I thought this novel was a slow but promising start to this new series by P.C. Cast. The world in this book was very creative and unique, which I really enjoyed. However, a large portion of this book was just world building. I thought it was interesting at first, but it became very tiresome. I felt like a large chunk of this book could have been cut out to make the story more enjoyable and feel faster paced. A large portion of the story felt like filler information until it got to the exciting ending. The ending definitely made me excited to check out the next book! The main character, Mari, got on my nerves a lot throughout the story. Mari felt ungrateful and whiny. I wanted to shake some sense into her! I wanted her to help her people, but she never wanted to. It made her seem so immature. I was thankful that she had character development and a change of heart by the end of the book. Nik was the other main character, and I liked him a lot. There was a lot of drama with Nik, but I enjoyed his character arc. Nik was brave and courageous almost to a fault. He was always trying to do what was right, and I really admired that. I liked Nik a lot more than Mari.I was surprised how adult this book felt. The writing felt young adult, but there were plenty of adult themes that I was not expecting. There were some elements of abuse and a lot of violence. I actually found it refreshing that the author decided to be different and address these topics in her novel. I also really liked the strong theme of friendship that stayed consistent throughout the entire story. The author included some romance but it was quite light and slow burning. I thought that was appropriate for a story more focused on the fantasy/paranormal aspects of the novel. As a romance lover, I would have preferred some more romance, but I think the romance still worked well for the style of the book.Overall, I found this to be a interesting start to a new series. I am looking forward to seeing what will happen as the series progresses. Since a lot of the world was built up in this book, I am hoping to have more of an exciting plot in the next novel. I would recommend this to people who are looking for a new YA fantasy novel.

3 / 5 Fangs*This ebook was given to me in exchange for a honest review. *
Posted by MissDaemon at 8:00 AM