My Unscripted Life by Lauren Morrill 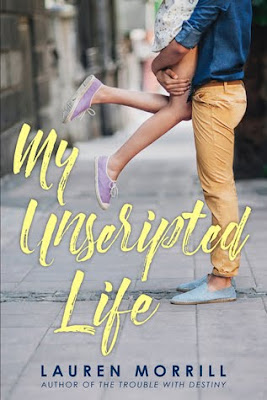 Perfect for fans of Jennifer E. Smith and Huntley Fitzpatrick, you'll love this funny and sweet contemporary romance about a Southern girl ready for a ho-hum summer until she meets the boy of her dreams who happens to be an international pop star.Sometimes love stories go off script.Another sultry Georgia summer is about to get a lot hotter. Dee Wilkie is still licking her wounds after getting rejected by the precollege fine arts program of her dreams. But if she'd gone away, she wouldn't have been around to say yes to an unbelievable opportunity: working on the set of a movie filming in her small Southern town that just happens to be starring Milo Ritter, the famous pop star Dee (along with the rest of the world) has had a crush since eighth grade.It's not like Dee will be sharing any screen time with Milo—she's just a lowly PA. And Milo is so disappointingly rude that Dee is eager to stay far away from him. Except after a few chance meetings, she begins to wonder if just maybe there's a reason for his offensive attitude, and if there's more to Milo than his good looks and above-it-all Hollywood pedigree. Can a relationship with a guy like Milo ever work out for a girl like Dee? Never say never. . .

My Unscripted Life was a fluffy and fun read. I blew through this book in one sitting! However, I definitely thought those book was a tad overdramatic and unrealistic.The main character, Dee, was a passionate and responsible girl. I admired that a lot about her, but I felt like she was a bit delusional and dramatic when it came to her romance with Milo. Dee seemed to think her and Milo were dating instantly, which made me want to roll my eyes. I just wish Dee would have taken a step back and slowed her roll a bit. I also would have liked to see her interact with Naz more. Naz and Dee had a great friendship that was hilarious and very sweet! Naz was there to give Dee some much needed reality checks, which I appreciated. I would love to read another book that focuses more on their friendship.The male lead, Milo, was a typical "bad boy". Milo was a jerk at first and I really didn't like him. I was worried that I would never like him as a romantic interest for Dee. Thankfully, he did change throughout the book and he said/did some really sweet things. I would have liked to see a little more development of his character, but I was still happy with the development that he did have. He ended up being a great character by the end of the book!The romance was cute and sugary sweet, but I did think it was rushed. I felt like Dee and Milo didn't have much time to form a real connection. I didn't really believe the relationship or their chemistry. I think their romance would have worked so much better if it was slower paced. Their relationship was a bit immature because it had so much drama and jealousy mixed in it. Honestly, it almost gave me a headache. However, I will admit that some of their romantic moments did put a smile on my face and make me swoon! Even if it was unbelievable, it still had cute moments. The best part of this book was the movie making aspect. Lauren put a lot of detail into what it is like to be on a movie set, and it was so interesting! I really enjoyed learning about what goes into making a movie and what happens behind the scenes. I think if I was in middle school or high school, this would have been the perfect book for me! I think my tastes are a little older than this book, but it was still a fun story. It was quick read that I would recommend to a younger audience who wants to read a romantic book!

3 / 5 Fangs*This ebook was given to me in exchange for a honest review. *
Posted by MissDaemon at 8:00 AM