Penny Kline didn't come to Honduras on a pleasure trip. She's here to rescue her kidnapped niece, the only family she's got left. What she didn't plan on was walking into a covert ops mission---or being wrapped up in the hard-muscled arms of Rafe Ortega. The cool-as-ice operative's touch may get her all hot and bothered, but no man can have a hold on her heart until her niece is home where she belongs.

Even in the tropics, Alpha Security operative Rafe can take down the bad guys without breaking a sweat. Hostage extractions. Clandestine missions. Those are the things he's been trained to handle. Relationships? Not so much. But one look at this strong, sexy redhead and he's seized by a fierce urge to protect her at all costs. Now Penny and Rafe will have to up their game because they're about to go into a master criminal's lair without backup, and the danger---and passion---is about to explode . . .

I love suspenseful romance novels, so I was extremely excited to get my hands on this book! The first chapter of this book started off explosive, and I was very intrigued to see what would happen next. However, I was disappointed that this book turned into more of a romance novel with a sprinkle of suspense. I like it when books have a lot of suspense and action with a side of romance. Even though the sexy scenes in this book were very passionate and well written, I felt like it completely took over the plot. I would have like to have the sexy time dialed back a notch. I think the romance would have felt more believable and even more passionate if it developed at a slower pace. The romance and chemistry just felt very abrupt. Even though this book was lacking in a lot of action scenes, I thought the author did a great job at writing suspenseful action when those moments came up. I felt like I was right there in the moment with the characters, and it had me on the edge of my seat! I think I would have enjoyed this book a lot more if the suspense was weaved throughout more of the story.I liked how there was a large cast of characters. Penny and Rafe were the main characters, but there were a lot of side characters that I found very interesting. I would love to have stories involving some of the other men that worked with Rafe. The only issue I had with the male side characters was that they all seemed to fall in love with Penny within the first few chapters. It felt a bit forced and it almost made me want to roll my eyes. By the end of the story, I really liked all of their friendships with Penny, but I just wish their infatuation with her wouldn't have been so sudden.Penny was an interesting main character. I thought she was loyal, passionate, dedicated, sassy, and funny! I did enjoy getting to know more about her. She always added some needed humor to a lot of the scenes in this book. I felt like she was a great main character for this story. The author really nailed her character. I will say that she became almost obsessed with Rafe right away, which was a bit ridiculous, but I still really liked her despite that. Rafe was a very typical alpha male character. He was very protective and very attractive. He made me swoon a few times, but he also was a little overbearing at times. I would have like to see his character develop a little bit more. This book was a start to a series that I could see having a lot of potential. The sexy scenes were very steamy, but I wish they would have been less frequent so the author could have showed off her action writing skills a bit more. However, this was still a fun read as a whole. I am interested to see what happens in the rest of the series, and I hope they focus more on the suspense so they romance can develop at a slower pace. Also, who else loves the cover of this book?! It is HOT!

“Allow him?” Penny’s gentle tone froze all five men to their spots. Instead of shrinking as she kicked off her heels, her stature grew. She glanced pointedly at each of them before landing on Trey, and never once raised her voice. “If Rafe had insisted on bringing any kind of security, it would’ve made it look like he had something to hide.”

“Yeah, but he didn’t need to agree to letting you tag along,” Trey argued.

She shrugged. “Fuentes likes women. Isn’t that why we thought sending me into the club with Rafe was a good idea to begin with? We got his attention. We got in. I’m not going to question why, and having been after this guy for months, neither should you.”

“We shouldn’t, but we are,” Stone interjected. “Too many innocents have been affected by Fuentes. We’re not eager to add to the tally.”

“My name was added to that list the moment the bastard took the only family I have left!”

As the rest of the team focused on Penny, Rafe’s gaze cut to his best friend. If he didn’t know Trey so well, he would’ve missed the minute twitch of his left eye. Faint, quick, and only happening once before Trey pulled himself back together, the brief flicker was his friend’s only physical show of weakness.

Rafe treaded carefully, clearing his throat. “I think what Stone means, Red, is that playing arm candy for a few hours is a hell of a lot different than having you under Fuentes’s roof—literally.”

When Penny folded her arms across her chest, fluffing up the already impressive view, Rafe knew there was more. “If you can tell me right now there isn’t the slightest chance Diego will rescind his invite if I back out, then I’ll stay behind.” No one could make that claim, and the grim smile on her face indicated she knew it. “No? Then I’m going.”

Stone perched on the edge of the couch. His gaze was stern, but his voice surprisingly gentle. “You have to understand something, sweetheart. We have no idea where the Fuentes compound is. The entire international alphabet-fucking-soup has been trying to track the bastard down for years. We’re their last line of defense before they have to tuck tails and admit they’ve fucked up.”

She tossed her hands up in the air with a growl. “Which is why it doesn’t make sense that you’d be willing to risk the chance of Fuentes telling us to bug off! You’ve never gotten this close before.”


Trey intervened. “You’d be going into this op dark, Penn—no backup if things go to shit. No support. We can’t send you in with wires or run-of-the-mill tracking chips, because the paranoid bastard has the capability of finding them. It’ll just be you and Rafe. And if things go to hell, it’ll be the two of you and the Honduran rain forest.”

“Good thing I was a Girl Scout, then, huh? I wasn’t blowing smoke up your skirts when I said I’d do anything to get Rachel back. The question is are you going to let me?”

Fuck no. The red-blooded man in Rafe wanted her sweet ass on a plane. Out of sight. Out of mind. And out of danger. But the trained operative grudgingly admitted that she had a point. Her leaving at this juncture in the game would make their job more difficult than if she stayed.

Still, it wasn’t Rafe’s call to make—thank fucking God.
Stone, looking a hell of a lot like a gargoyle, went quiet. That alone wasn’t what alarmed Rafe, because the Alpha head often kept his thoughts under a tightly sealed wrap. What had Rafe holding his breath was the way Stone tapped his fingers against his thigh…as if he was in deep thought.

And then his boss’s gaze shifted to him. Fuckin’ A.

“The decision’s yours, Ortega.” Lips pressed into a thin line, Stone’s expression looked anything but thrilled. “You’re the one going on the inside with her. I know I don’t have to remind you that you’re going into this deaf and blind. Bail enforcement or not, Penny’s not Alpha trained. That means on top of everything else you’re responsible for, you need to add her to the list—and right at the damn top.”

“Yeah, he does. Though you can hit a target and inflict a fair amount of damage, you’re green. You’ve never been on this kind of an op. Hell, even Ortega hasn’t.”

But no fucking pressure. Dealing with Taliban leaders in the middle of the desert had nothing on the expectant stare Penny slid his way. On the exterior, she looked the poster girl for calm and cool. Direct gaze. Back straight. But the subtle bite to her lower lip identified it as a carefully controlled ruse.

He wanted to say what his team expected him to—no fucking way. But the words wouldn’t come.

Though he didn’t have family in the true sense of the word, everyone associated with Alpha was his family—even their ball-buster analyst, Charlie. If he were in Penny’s shoes, he’d turn over every rock in the Afghan desert, search every damn block of ice in the Arctic, and make a deal with the devil if it meant the safe return of his family. That same brand of loyalty was etched on every feminine curve of Penny’s face.

Lives counted on their success, and not just their own, but Rachel’s and the countless others being subjected to Freedom and God only knew what other nasty drugs Fuentes pedaled around the globe.

Meeting Penny’s gaze, Rafe mentally relived the last week—Penny sparring in the training room, the too-close-for-comfort scuffle in the alley, and the professional ease with which she handled the meeting with Fuentes. Hell, she’d been the one who remained casually aloof while he nearly reached across the table and throttled the sick fuck with his bare hands.

He couldn’t believe he was going to fucking say it. “Don’t make me regret agreeing to this, Red.” 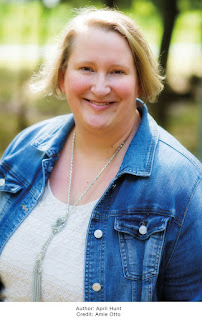 April blames her incurable chocolate addiction on growing up in rural Pennsylvania, way too close to America's chocolate capital, Hershey. She now lives in Virginia with her college sweetheart husband, two young children, and a cat who thinks she's a human-dog hybrid. On those rare occasions she's not donning the cape of her children's personal chauffer, April's either planning, plotting, or writing about her next alpha hero and the woman he never knew he needed, but now can't live without.