Today we are sharing the cover for COMEBACK COWBOY by Sara Richardson. This is the second book in her brand new series, Rocky Mountain Riders. It is currently up for pre-order and will be released June 27, 2017! 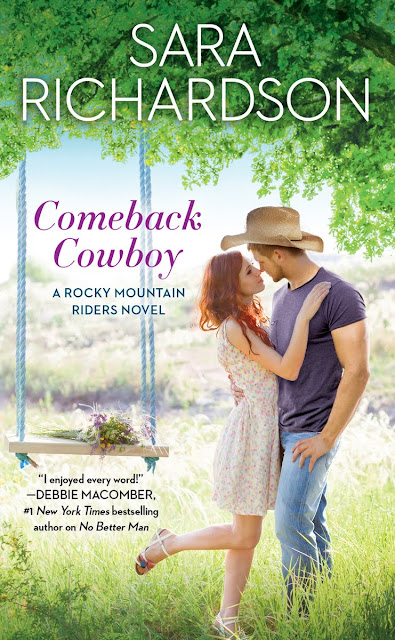 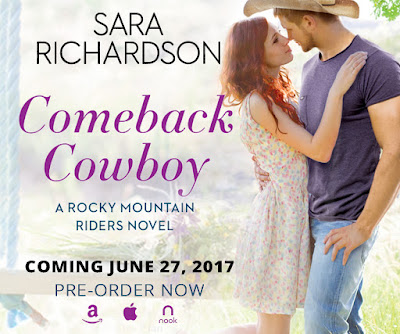 The years had only made him sexier, engraving the wise lines of experience into the corners of his hazel eyes. Eyes that somehow still smiled, even with all he’d been through. He left his bronze hair a bit longer these days, so that the ends of it fringed the tops of his ears. It was still thick and luscious, but it was his smile that had lured her in and stayed with her all these years. His smile spoke.

A familiar tremble tightened her hands into fists. A tremble that spoke to the way her fear fused with anticipation at being so close to him, at having felt his arm slide around her waist so easily back on the highway.

The encounter had struck her hard—an electrical current splitting her into two different people—the woman who wanted to be wrapped up in him again and the girl he’d once left behind. The girl who’d made mistakes but righted them all on her own. The girl who’d grown up overnight. The girl who still feared his power over her.

Because she couldn’t do it again. She couldn’t let herself feel a connection with him only to have him disappear for another ten years. She couldn’t risk revealing everything to him.
She blinked, realizing that she’d been staring at him too long.


Not that he seemed to mind. His lips simply quirked in the corners as though he was enjoying it.

PRE-ORDER THE FIRST BOOK IN THE SERIES

NEVER FALL IN LOVE WITH A COWBOY

Jessa Mae Love is done with relationships. No matter how tempting he might be, she cannot--will not--fall for a man like Lance Cortez. The outrageously handsome cowboy is practically a living legend in Colorado, as famous for riding bulls as he is for breaking hearts. What would a big-time rodeo star like him see in a small-town veterinarian who wears glasses, rescues animals, and cries when watching rom-coms? Turns out, plenty.

Raising bulls, riding the circuit, and looking after his ailing father--Lance never stands still for long. Yet Jessa catches his attention, and the more she tries to resist him, the more he wants her. When she agrees to move to the ranch to keep an eye on Lance's dad, Jessa tells him they have to keep it professional: no flirting, no sweet talk, and definitely no kissing. But with Jessa now living under his roof, that's easier said than done . . .


What reviewers are saying about Sara Richardson's novels...

"Richardson's debut packs a powerful emotional punch. [Her] deft characterization creates a hero and heroine who will elicit laughs in some places and tears in others."―Publishers Weekly on No Better Man

"4 stars! Hot! Richardson brings us a modern read set in beautiful Aspen. Her brisk storytelling and the charming, endearing characters set within a solid, engaging plot make this sweet romance shine. A strong and vulnerable Bryce, coupled with a determined, lighthearted Avery, will appeal to readers, especially with their sizzling chemistry. This is a truly delightful read."―RT Book Reviews on No Better Man

"The perfect balance of humor, heart and heat. I couldn't put it down! Sara Richardson will sweep you away."―Christie Craig, New York Times bestselling author on No Better Man

Sara Richardson grew up chasing adventure in Colorado’s rugged mountains. She’s climbed to the top of a 14,000-foot peak at midnight, swam through Class IV rapids, completed her wilderness first-aid certification, and spent seven days at a time tromping through the wilderness with a thirty-pound backpack strapped to her shoulders.


Eventually, Sara did the responsible thing and got an education in writing and journalism. After five years in the corporate writing world, she stopped ignoring the voices in her head and started writing fiction. Now, she uses her experience as a mountain adventure guide to write stories that incorporate adventure with romance. Still indulging her adventurous spirit, Sara lives and plays in Colorado with her saint of a husband and two young sons. Her first contemporary romance, No Better Man, was released by Grand Central forever 2015.