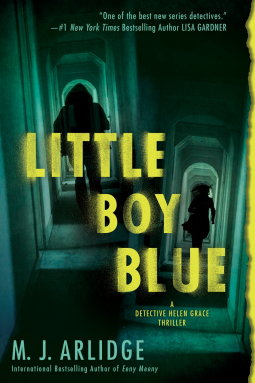 Detective Inspector Helen Grace is no stranger to tragedy. But when a body is found in a Southampton nightclub, the death cuts too close to the bone. Hiding her personal connection to the victim - and a double-life which must remain secret at all costs - Helen becomes a woman possessed, working her team around the clock to chase down every lead. As the killer strikes again, the investigation takes its toll not only on Helen but also her senior officers. Tempers flare, friendships fray and Helen faces an impossible choice. Confess her sins and lose control of the case? Or keep living a lie, protecting her darkest secrets, and risk getting trapped in this tangled web? But whatever she does, this killer will not stop until the truth is revealed: there are some fates worse than death.

I want to SCREAM!!! It ends in a CLIFFHANGER! I don't know what to do with myself. I couldn't believe it. I kept on flipping back and forth but no new end magically appeared.

I'm stunned. I read Eeny Meeny, which was good but Little Boy Blue is so much better. The characters have grown since the last time I read about them. Usually, I'm not someone who likes multiple POVs but in this case, I think it gives us the opportunity to learn more about the insecurities, pain, and sadness these characters are feeling. It humanizes them. Makes me feel invested in them.

There's a lot going on with this novel. Helen and her team are called to an S&M nightclub where a murder has occurred in The Torture Rooms. When she gets there she discovers the victim is bound and probably died of asphyxiation. What she never saw coming is that she knew the victim. It's Jake, her former dominator. She hasn't had a relationship with him in a while, but the shock is there. She wasn't prepared to face something like this. She is not sure if she should speak up and let her superior know she knew him. However, she is sure Jake didn't deserve this and she wants nothing more than to catch his killer.

Helen knows her private life is in danger of coming out. Her life left wide open for the public and her team to discover. When another body is found and it has a connection to her as well, she can't stop thinking she might be cursed after all.


“it made her wonder whether somebody might in turn be watching her.”

Wonderful narrative with a huge deal of suspense. I didn't want to put the book down. The psychological side of it had me on my toes. Who was the culprit? Why Jake? Was it related to Helen? I had so many questions but by the end, I wanted nothing else than to know what happens next.


A complimentary copy was provided by the publisher via netgalley in exchange for an honest review.
Posted by MrsLeif at 8:01 AM