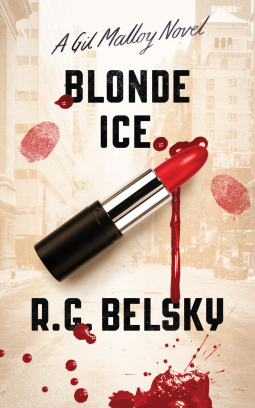 From the author of the “thought-provoking thriller” (Jan Burke) The Kennedy Connection comes a gripping mystery featuring crime-stopper and star Daily News reporter Gil Malloy who takes on his most explosive and exciting story yet—a blonde femme fatale in New York City who is killing men for thrills.

Son of Sam. Ted Bundy. The Boston Strangler. All of these infamous serial killers who made front page news shared a common trait—they were men who killed women for a sexual thrill.


But now Gil Malloy—ace reporter for the New York Daily News—is on the trail of a different kind of serial killer who breaks all of the rules. Dubbed “Blonde Ice” by the media, she’s a sexy blonde who picks up seemingly random men at bars and clubs, has sex with them, and then brutally murders them afterwards.


Malloy—who is already in the middle of a major political story about the election of the next New York City mayor—finds himself drawn to the case by secrets from his past. As he digs deeper, he begins to suspect that there could be some kind of link between the mayoral race and the emergence of the Blonde Ice killings.


As the body count and the political stakes continue to rise, Malloy soon realizes he’s covering what could be the biggest story of his career. All he has to do is live through it.

I love the narrative and the pace of Blonde Ice. A perfect book to me is one which makes you forget everything else around you. This one is one of those. It grabs you from the first chapter and it won't let you go until you hit the end.

Let me tell you a little bit about Blonde Ice. The body of a man is discovered brutally assaulted in a hotel room. There's proof this man had sex before dying but this man is not single. He's married to Victoria who used to be a famous prostitute by the name of Houston. Houston has a connection with the main character/hero Gil Malloy. In a way, she almost ruined his life, when he did a serial piece on prostitution from multiple interviews but he made it look like it was her who was giving him the information. When the truth came out, his job is threatened, his marriage ends. It takes many years for Gil to get back to the spotlight. He's currently working on the next New York Major election. Having this woman back in his life affects him in so many ways. However, the story doesn't end there. When another male body is found, the police starts feeling like they might have a female serial killer on the loose. One that targets men who cheat on their wives. All they know is that woman responsible for the murders is a stunning blonde. She's smart and she seems to be one step ahead of everyone. Gil becomes part of the case when she starts contacting him.

I love Gil's character. He was charming, funny but he also showed his insecurities. In the past, he had made a terrible mistake that cost him his marriage but now he has a second chance at happiness. He was doing all the right things to accomplish it. He was also a very good investigator reporter. He had good instincts and he trusted them. He knew when things didn't feel right and he was willing to take the extra step to get to the bottom of the story. He had an eye for beautiful women, especially blondes. I think that made him even more worried about the case and his own future.
One more thing, I'm in agreement with Gil in regards to his last theory.

After finishing it, I want to go back to read the other two book in the series. I know I read some spoilers but I think I will still enjoy them.