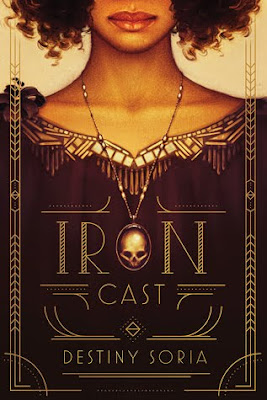 It’s Boston, 1919, and the Cast Iron club is packed. On stage, hemopaths—whose "afflicted" blood gives them the ability to create illusions through art—captivate their audience. Corinne and Ada have been best friends ever since infamous gangster Johnny Dervish recruited them into his circle. By night they perform for Johnny’s crowds, and by day they con Boston’s elite. When a job goes wrong and Ada is imprisoned, they realize how precarious their position is. After she escapes, two of the Cast Iron’s hires are shot, and Johnny disappears. With the law closing in, Corinne and Ada are forced to hunt for answers, even as betrayal faces them at every turn.

Iron Cast was a book I was really looking forward to, but sadly, it didn't live up to my expectations. I couldn't connect to the characters and I felt like the book dragged. I just had a hard time pushing through this book. However, there were some things that I did enjoyed about this book. I thought the diversity of the characters was fantastic. I was really happy to see some more diversity in YA literature! I also liked the fact that the author addressed racism in this book because I think that is an important issue that should be addressed. I thought the author handled both diversity and racism perfectly. The hemopathy aspect was very interesting. I thought it was unique concept and it was very detailed, but the explanation of it kind of bogged down the book. Some of it felt very info-dumpy. I think that it was part of the reason why the book felt slow. A lot of the book focused on illusions and politics which was interesting at first, but it quickly became repetitive and tiresome.

I liked the characters, but I never thought they were stand out characters. Ada and Corinne were fine, but they were a bit bland. I would have liked them to have a bit more dimension to their characters. One thing I did like about the characters was the focus on friendship. I really appreciate it when authors focus on strong friendships, and I think the author did a great job at executing that. Overall, this book was okay. I thought the paranormal aspect was unique and I applaud the author for being so creative. I am also so grateful that the author wrote a book with such a diverse cast. Sadly, the slow moving plot and the unmemorable characters made it hard for me to connect to this novel as much as I was hoping to. I would still recommend that people give this book a try because I think a lot of people would still like this book even though it wasn't the perfect book for me. 2.5 - 3 / 5 Fangs*This ebook was given to me in exchange for a honest review. *
Posted by MissDaemon at 8:00 AM