We are so excited to bring you the Release Day Launch for TRICKED by Rebecca Zanetti, a novella in her Dark Protectors Series brought to you by 1001 Dark Nights! Grab your copy of this sexy novella today!

Former police psychologist Ronni Alexander had it all before a poison attacked her heart and gave her a death sentence. Now, on her last leg, she has an opportunity to live if she mates a vampire. A real vampire. One night of sex and a good bite, and she’d live forever with no more weaknesses. Well, except for the vampire whose dominance is over the top, and who has no clue how to deal with a modern woman who can take care of herself.

Jared Reese, who has no intention of ever mating for anything other than convenience, agrees to help out his new sister-in-law by saving her friend’s life with a quick tussle in bed. The plan seems so simple. They’d mate, and he move on with his life and take risks as a modern pirate should. Except after one night with Ronni, one moment of her sighing his name, and he wants more than a mating of convenience. Now all he has to do is convince Ronni she wants the same thing. Good thing he’s up for a good battle. 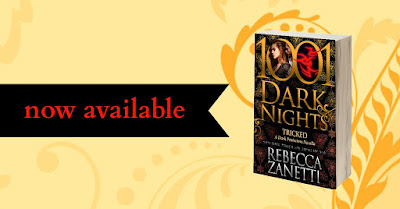 His voice was husky to the point of being gritty and settled along her skin like it wanted to stay. He stood in the center of her living room, making the area seem so much smaller than it normally appeared. He was the tallest, broadest, and most dangerous person she’d ever invited into her home, and the jewel colors around him only emphasized his darkness.

Black hair, black eyes, black leather jacket.But it wasn’t just the absence of color.It was the look in those eyes and the tension in that tight body.

She cleared her throat and moved to stand.

He waved her back down.“I’m not leaving until we discuss my offer.”He shrugged out of his jacket.

The play of muscle, raw and powerful, through his faded T-shirt caught her attention.She shook her head.“Not now.I’ll call you.”

His full lips twitched, and a sparkle lightened those eyes just enough to make them gleam like a predator hunting at night.“The offer is only good for the next hour or so.”He sat and the very faded denim across his thighs stretched.The man overwhelmed the oversized reading chair.“Not that you have much time left.”

She swallowed.“Can you tell how long?”

“No, but I can hear your heart beating with a stutter way too slowly.”He lowered his chin and studied her, his rugged face set in strong lines.“Even your lips are blue from lack of oxygen, Veronica.”

Only her grandmother back in Colombia used her full name—and usually when Ronni was in trouble. But at the moment, she had more important things to concentrate on while her brain still worked.If she died, she’d fail once again.Just like her father had said she would.She shook her head, banishing thoughts of her crappy childhood and the fact that he’d never see what she’d become, considering he’d died years ago.“Show me again,” she said softly, turning her attention back to the man inside her apartment.

Jared tilted his head to the side.“You have the oddest fascination, lady.”

He sighed and opened his mouth, allowing razor-sharp fangs to slide down.

She shivered, her gaze caught.“Amazing.”

He rolled his eyes, and the fangs disappeared.“Not really.”

New York Times and USA Today Bestseller Rebecca Zanetti is the author of over twenty-five dark paranormals, romantic suspense, and contemporary romances. She lives in the wilds of the Pacific Northwest with her own Alpha hero, two kids, a couple of dogs, a crazy cat…and a huge extended family. She believes strongly in luck, karma, and working her butt off…and she thinks one of the best things about being an author, unlike the lawyer she used to be, is that she can let the crazy out. Her current series are: The Dark Protectors, The Maverick Montana Cowboys, and the Sin Brothers series. Upcoming series are: The Realm Enforcers and The Scorpius Syndrome.