Lessons in Gravity by Megan Westfield

April Stephens’s dream to be a documentary filmmaker rests on her acing her internship with Walkabout, and that means getting the abrasive Josh to give her more than one-word answers in his interviews.

The problem is, with every step forward professionally, she and Josh are also taking a step forward personally, and after watching her stunt pilot father die in a fiery crash, a guy who risks his life for a living is the last person she should be falling for. Especially because in one month her internship will have them dangling three thousand feet in the air from the side of the Sorcerer. She’ll be filming. He’ll be climbing without a rope.

For a girl who has never rocked climbed or filmed a documentary before, I now feel like a rock climbing and documentary expert after reading this book! The author did a great job at describing the rock climbing and the film making process. The information was weaved naturally through the story, and I never felt bogged down with information. I could clearly picture what was happening, and I understood the reasoning behind everything. The scenery was also described beautifully. I honestly felt like I was out in the wilderness right with the characters! April was a good main character for this story. She was someone who would do anything to accomplish her dreams, and I really admired that about her. It was easy to connect with April and hope that she succeeded in achieving the goals she set for herself. I thought the author developed her character well throughout this story. I liked learning more and more about her as the book progressed.Josh was the male lead character, and dang, he sounded very attractive. It took a while for me to connect with him on the same level that I connected with April on. Josh came off as cold and uncaring for a while, and it was hard for me to warm up to him. I wanted to learn more about him, but he wasn't offering anything up. That made it hard for me to understand what was really going on in his head for a large portion of this book. I think it would have been very interesting to have read from him POV so the reader could have understood him a little bit more.I thought Josh and April made a good couple because personalities worked well together. Due to that, I thought they were going have a very passionate and romantic romance, but it was kind of dull. There just wasn't a "spark" between them. This lead to the story feeling a bit slow in the middle of the book. Overall, I thought this was an interesting and fun read. The author did a great job at describing the beautiful scenery, the rock climbing, and the making of the documentary. I just wish there would have been more passion in the romance to spice the story up. However, I am looking forward to trying out more books by this author in the future. 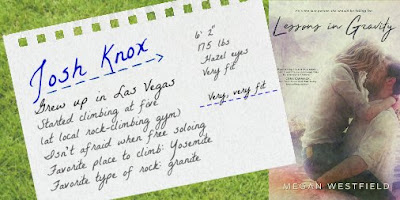 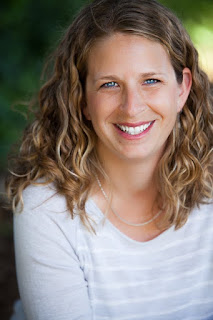 Megan Westfield has dabbled in many hobbies and pastimes over the years, ranging from playing the cello to cake decorating (i.e., icing-eating) to a dozen different outdoor adventure sports. Eventually, she discovered the only way to do it all was though writing—her first and strongest passion. She writes new adult fiction because she loves exploring the powerful and formative years between high school and the quarter-life crisis. As a reader, her favorite books are those with a truly unique, real-world setting, and, of course, a love story.

Megan grew up in Washington state, attended college in Oregon, and lived in Virginia, California, and Rhode Island during her five years as a navy officer. She is now a permanent resident of San Diego where she and her husband count family beach time with their two young kids as an adventure sport. Megan was formerly the editor of a small weekly newspaper in Southern California and is represented by Melissa Edwards of Stonesong Priest Literary Agency.