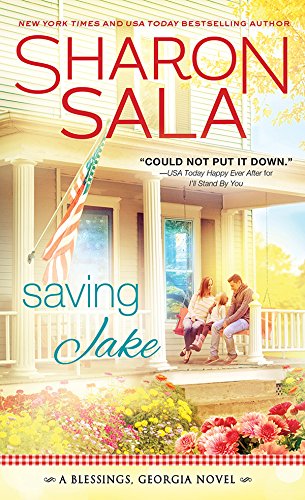 There is always hope

After eight years in the Marines, Jacob Lorde returns to Blessings, Georgia, with no plans other than to hole up in his empty house and heal what's left of his soul. But with a charming next door neighbor and a town full of friendly people, keeping to himself is easier said than done.

As long as you can come home

Laurel Payne understands far too well what Jake is going through, after witnessing her late husband experience similar problems. She's in no hurry to jump into another relationship with a complicated guy, but their attraction is undeniable and perhaps exactly what both of them need.

Being back in Blessings, Georgia is like reading your favorite book while drinking hot cocoa next to a nice fireplace.

If I had to describe this series, I would say heartwarming with a touch of faith. The main characters are always likable and you want them to be happy.

Jacob Lorde is a marine who's coming back home to Blessings after he was injured on his last tour. He survived but he was left with a limp, scars and he's suffering from PTSD. His father is recently deceased and Jake has decided to move into his house and fix it up. He's thankful when Laurel offers to give him a ride home instead of walking home.

Laurel Payne is a widow. Her husband Adam was a soldier too but he committed suicide, leaving Laurel and their daughter Bonnie alone. Laurel has worked hard to keep a roof over their heads with no help from his in-laws. When she sees Jacob, she is willing to give him a lift to his house but falling for another soldier is not what she wants. On the other hand, Bonnie takes a liking to him right away.


“Honey, it’s okay to be afraid of something, but facing it anyway because you have to…that’s what it means to be brave.”

In a way,  their loneliness and Bonnie bring them together. Of course, there is someone who's not too happy about Jake coming back home. He wants to make Jake suffer. But, Jack is ready to protect what he cares for.


“She imagined him wounded and bloody—like Adam had been bloody, except Adam had wanted to die and Jake had obviously fought hard to live.”

Saving Jake was another sweet story by Sharon Sala. Laurel was a good mom, a very hard worker. She liked Jake but she was trying to protect herself from more heartache.

Jake was a great man. It was easy to fall for him. The poor guy had a tough time dealing with his time in combat. He was readjusting to the small town life. I loved how he was with Bonnie and how much he cared for her and for Laurel.

One of the things I like the most about this series is how the whole town has a way of coming together to help the people who need it the most.