Laura Kaye’s RIDE HARD, the first novel in Laura’s Raven Riders Series, is on sale for a very limited time for only $1.99! Be sure you grab it and pre-order RIDE ROUGH, the second novel in the Raven Riders Series releasing April 25, 2017! A sexy romantic suspense, you might’ve first met the Ravens in the Hard Ink world, but this series stands on its own and is even sexier, edgier, and grittier! The Raven Riders Series takes you on a new adventure and kicks it into overdrive!


Get Ready for RIDE ROUGH with an exclusive excerpt AND a Sale on RIDE HARD!

A NOTE FROM LAURA KAYE:

OMG you guys! I’m so excited! Because the first book in my new Raven Riders series is on sale for the first time AND I’ve got an advance excerpt from the second book here for you to enjoy! The Raven Riders is a new sexy contemporary romance series, and a spin-off from my Hard Ink world, about a different kind of a motorcycle club with a protective mission. Ride Hard tells the story of a naïve woman on the run who’s been rescued by the jaded and tormented president of the Raven Riders, who learns that she’s strong enough to save herself and the man she loves, too. Ride Rough is a second-chance love story that is so hot and emotional that I absolutely adored writing it! I hope you’ll check both out! Now, enjoy this delicious tease from Ride Rough, coming 4/25/17, and grab your copies of BOTH! Thanks for reading! ~ Laura Kaye 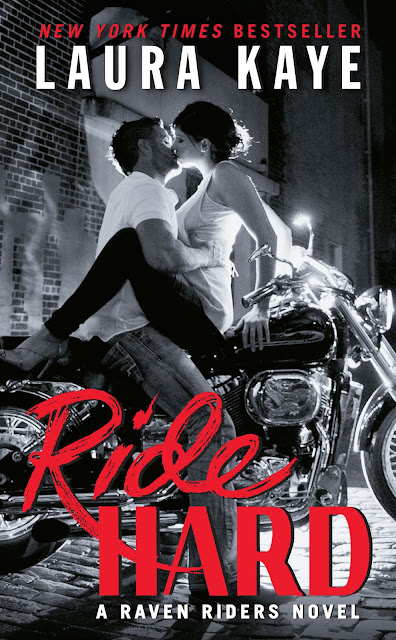 They live and ride by their own rules.

These are the Raven Riders…

Raven Riders Motorcycle Club President Dare Kenyon rides hard and values loyalty above all else. He’ll do anything to protect the brotherhood of bikers—the only family he’s got—as well as those who can’t defend themselves. So when mistrustful Haven Randall lands on the club’s doorstep scared that she’s being hunted, Dare takes her in, swears to keep her safe, and pushes to learn the secrets overshadowing her pretty smile.

Haven fled from years of abuse at the hands of her criminal father and is suspicious of any man’s promises, including those of the darkly sexy and overwhelmingly intense Ravens’ leader. But as the powerful attraction between them flares to life, Dare pushes her boundaries and tempts her to want things she never thought she could.

The past never dies without a fight, but Dare Kenyon’s never backed down before… 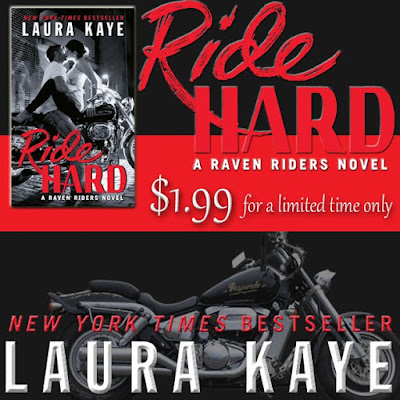 Maverick Rylan won’t apologize for who he is—the Raven Riders Motorcycle Club Vice-President, a sought-after custom bike builder, and a man dedicated to protecting those he loves. So when he learns that the only woman who has ever held his heart is in trouble, he’ll move heaven and earth to save her.

Alexa Harmon thought she had it all—the security of a good job, a beautiful home, and a powerful, charming fiancé who offered the life she never had growing up. But when her dream quickly turns into a nightmare, Alexa realizes she’s fallen for a façade she can’t escape—until sexy, dangerous Maverick offers her a way out.

Forced together to keep Alexa safe, their powerful attraction reignites and Maverick determines to do whatever it takes to earn a second chance—one Alexa is tempted to give. But her ex-fiancé isn’t going to let her go without a fight, one that will threaten everything they both hold dear.

It was one of Maverick’s favorite dreams.

He and Alexa had gone up to Swallow Falls in Western Maryland for a weekend getaway and were staying in one of the mini cabins at the state park. After a day of hiking and swimming and picnicking outside, they’d come back to their cabin tired and ready to crash, but getting naked for showers had sidetracked them for hours. And even once they finally fell asleep, Maverick was hard and ready every time he woke up, and he took her again and again, falling asleep still buried inside her . . .

And fuck if he wasn’t ready right now.

He burrowed his face in Alexa’s soft hair and banded his arm around her stomach. His hand filled with the soft mound of her breast. He pulled her back against his chest and ground his erection against the swell of her ass.

Hell, yeah. He nuzzled her neck, kissed her there, tasting and nipping and sucking. God, he needed in her. “Fuck, Alexa,” he whispered.

Her hand gripped his. “Maverick.”

He rolled her under him and crawled on top of her, his body falling into the cradle of her spread thighs.

He frowned and kissed her jaw, her cheek, her mouth.

It was the kiss that did it. Something wasn’t right. The memory playing out in his sleep-fogged mind didn’t feel like the reality confronting his physical senses. His eyes blinked open.

And he found himself lying on top of Alexa. Not in the cabin at Swallow Falls years before. In the gray morning light of his house. Her wide hazel eyes stared up at him.

He reared off of her in an instant. “Fuck,” he said, coming to stand by the couch. Alexa looked stunned—and so fucking sexy that Maverick barely resisted crawling back on top of her. She lay on her back in his clothes, on hiscouch, her knees drawn up and falling out, her hair sleep-mussed and sexy. Jesus. He adjusted himself, unable to hide his raging hard-on, and scrubbed at his face. “Goddamn dream. I’m sorry, Alexa. I didn’t mean to do that.”

His gaze narrowed. “Don’t ask a question you don’t want the answer to.”

She swallowed and licked her lips. “What if I do want it? The answer,” she added.

Years of need and longing roared through Maverick like a drug he’d mainlined. His thoughts spilled out unfiltered. “Damnit, Al. You’re laying there in my clothes in my house with your thighs spread after I’ve just woken up holding you. My skin smells like you. And I’m sporting an erection because of you. Don’t fuck with me.” The words came out harsher than he intended, but she couldn’t play with him. Not on this. Not when he cared so much. Not when hewanted so much.

Her mouth dropped open and her chest rose and fell a little quicker. “I’m not playing a game. I want to know.”

Planting his hands on his hips, Maverick studied her. Her beautiful, languid body. Her pretty, open face. Her eyes, honest and free of pretense. He felt pulled in a million directions. Between wrong and right, between taking advantage and taking care, between giving in and opening himself up to a world of hurt. “I was dreaming of you. Of us. Up at Swallow Falls.”

“Fuck.” He dropped his chin to his chest and closed his eyes. Trying to be bigger than his base needs. Trying to put her before himself. “Whatever is about to come out of your mouth is not a good idea.”

“Maverick!” she nearly yelled. “Listen to me.”

His gaze cut up to hers in time to see her sit up a little and take off her shirt. Well, his shirt. Then she laid back again, her eyes on him, drinking him in, inviting him in. “What if I do want it?” she whispered.

Something inside him snapped.

He was on her in a second. Body covering hers. Hands going to her warm skin. Mouth tasting her everywhere—her shoulder, her throat, her cheek. His chest pressed against her breasts, her hard nipples evident, her excitement palpable. And then his mouth found hers. On a triumphant groan, he claimed her, his lips sucking, his tongue penetrating. His big hand found her breast and kneaded at the soft mound.

And Alexa was right there with him. Moaning, kissing him, clutching on to him. Her thighs wrapped around his hips and her fingers twisted in his hair.

Why did bad ideas have to feel so good?

Laura is the New York Times and USA Today bestselling author of over twenty books in contemporary and paranormal romance and romantic suspense, including the Hard Ink and upcoming Raven Riders series. Growing up, Laura’s large extended family believed in the supernatural, and family lore involving angels, ghosts, and evil-eye curses cemented in Laura a life-long fascination with storytelling and all things paranormal. She lives in Maryland with her husband, two daughters, and cute-but-bad dog, and appreciates her view of the Chesapeake Bay every day.