Shy. Intelligent. Naive. Statistic. Raine Forester was an average girl leading an average life. She slipped beneath everyone's radar, until Camron Moss, the most popular guy in school, took interest in her and changed everything. Some acts are unforgivable. Raine thought she'd been accepted. She thought she was one of them. She thought she was in love... until one moment made her realize she'd trusted the wrong person. Lies are told, hearts get broken, secrets are revealed, and sometimes, true love is found in the least likely places.

Warning: RAINE contains adult situations some readers may find offensive. This is a deeply emotional story that contains violence, explicit sex, strong language, and is not considered suitable for readers under 18. 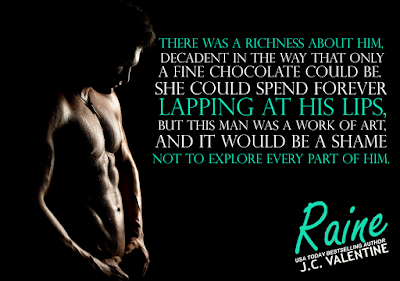 Raine’s thoughts were a swirl of sensation and emotion, all threatening to consume her. Jarret was kissing her. The act was so sudden, so unexpected, it wrenched a startled moan of pleasure from somewhere deep inside. Unbidden, her body leaned into his, and her fingers dug into the hard flesh of his solid triceps.

The man was built.

She knew Jarret must take good care of himself just by the perfect way in which his clothes hugged his body, as if they wanted to get closer and never let him go. Pretty much what she suspected most girls felt like when they set eyes on him.

Then he’d come down the stairs soaking wet from his shower and wrapped only in a towel, and he’d blown whatever lame ass fantasy she might have had about him right out the window.

Jarret was absolute perfection. He was all honed muscle that a man his age shouldn’t be able to have, and that only came with years of hard work and dedication.

Not that she was an expert in bodybuilding, but she’d seen the kind of constant, strenuous activity Camron and his teammates performed in order to get and stay in shape for the season.

Having her hands wrapped around all that muscle made her stomach flutter, and when Jarret tilted her head to the side and deepened the kiss, her legs threatened to give out. It was a good thing she was already sitting down.

Snaking one arm around her, Jarret crushed Raine against his chest. His other hand still cupping her face moved to the back of her head, closing in a fist around her hair, and held her tight as he plunged his tongue inside her mouth.

Holy crap, the man could kiss, too.

Raine wasn’t new to kissing. Camron had taught her much, but Jarret’s mouth felt like a once-in-a-lifetime experience. Good Lord, she hoped it wasn’t.

His lips were a contradiction—soft but firm, hard but forgiving, demanding but cautious. The longer it went on, the more her body craved. Raine let out a whimper as he nipped her bottom lip with his teeth, and gripped him tighter, wanting more, wanting everything.

He’d turned something on inside of her, like a switch. Something she didn’t know she wanted, but now had to have. Desperately.

Instead of giving her body what it craved, Jarret pulled away. Her head still spinning from the amazing kiss, Raine fell forward. Grabbing her shoulders, Jarret steadied her.

His lips glistened from her kiss, and Raine couldn’t seem to take her eyes off them. Never taking his eyes from hers, Jarret wiped his lips dry with his fingertips. Taking a deep breath, he motioned to the living room.

“I’m going to get dressed then order a movie.” 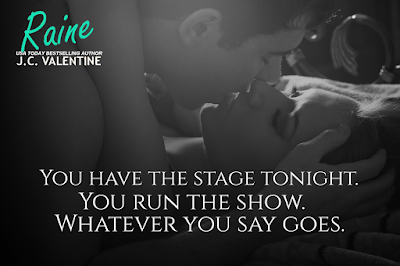 J.C. Valentine is the USA Today and International bestselling author of the Night Calls and Wayward Fighters Series and the Forbidden Series. Her vivid imagination and love of words and romance had her penning her own romance stories from an early age, which, despite being poorly edited and written longhand, she forced friends and family members to read. No, she isn’t sorry. J.C. earned her own happily ever after when she married her high school sweetheart. Living in the Northwest, they have three amazing children and far too many pets and spend much of their free time together enjoying movies or the outdoors. Among the many hats she wears, J.C. is an entrepreneur. Having graduated with honors, she holds a Bachelor’s in English and when she isn’t writing, you can find her editing for fellow authors. Sign up for J.C.’s newsletter and never miss a thing!