One Step Behind by Brianna Labuskes 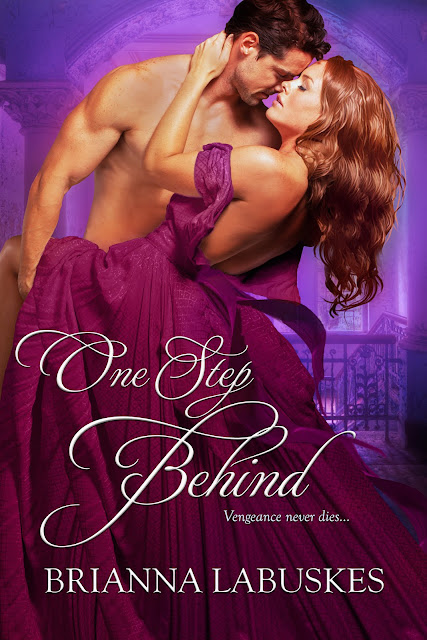 Vengeance never dies … When the unconventional Imogen Lancaster embarked on a mission to infiltrate high society and avenge her beloved cousin’s murder she never would have guessed she’d end up in the arms of a thief. At least, that’s what she assumes when she discovers Lucas Stone breaking into a private safe. Lucas Stone, the Earl of Winchester, has a reputation for arrogance and a soft-spot for his sister, which is how he ends up in the predicament of hiding behind a curtain at midnight with the dreadfully dull Miss Imogen Lancaster. But he soon discovers appearances can be deceiving when the country mouse turns into a spitfire in front of his eyes and she makes it clear she wants nothing to do with him. Though one is chasing a blackmailer and the other a murderer, they quickly realize they are on the hunt for the same villain. Now they must work together, which would be fine, if they could decide if they’d rather fall in love or kill one another.

Lucas had never proposed before, but he did not think the desired reaction was blind panic. He tried not to be insulted as the color drained from Miss Lancaster’s face.

“Have you gone mad?” She leaped to her feet and began to pace.

His temper pricked. It was the clear solution to their problem, but she seemed to find the mere suggestion appalling. A blow to his pride, indeed. “It is perfectly sane. In fact, it is the most logical course of action. It allows us to be seen together, and for me to escort you around town so that I can protect you, and it will head off any scandal before it can gain legs.”

“I don’t need you to protect me,” Gemma protested, without pausing her fretful wanderings around the study.

Rosalind remained quiet, but they both tracked Gemma as she moved around the small room.

“What about me?” Lucas asked softly.

She finally paused and turned her fierce blue eyes on him.

“What do you mean?” she asked, wary. She was intelligent and sensed a trap.

“If we do not make our arrangement respectable in the eyes of the ton, and scandal ensues, my reputation will be in tatters as well,” he said. He noticed Rosalind narrow her eyes, but still she did not interrupt. The idea to announce their engagement had not come from the blue. The possibility had occurred to him the evening before, when he was sneaking out of her carriage. Above all else, and as much as she protested against it, he needed to ensure her safety if they were to embark on this investigation together. The only way to do that was to be close to her far more often than the boundaries of propriety allowed.

“What are your objections?” Lucas asked. He believed he could knock down all her oppositions if given enough time. She was no frivolous society dilettante. She would see the logic of the idea.

“First, no one will believe it,” she said, waving her hand in his direction.

“They will believe it if I announce it,” he said firmly. First notion dismissed. “What else?”

“What will happen when we catch the killer?” She paused right after she spoke the words. Clearly a thought had just popped into her head. He braced himself for the inevitable madness that was about to come. “You will have to cry off,” she said in a rush of words.

“No.” It was a gut reaction—the only one he could muster in the moment.

“Don’t you see, it’s perfect,” she said, clearly warming to the crazed notion. “I was planning on returning to the country at the end of the affair. Or perhaps I will travel instead.” She lit up with excitement as he scowled at her.

This was not going as planned. Nothing ever seemed to when it came to Gemma.

“Gemma ...” he began, not even sure where to start. Mostly because he didn’t quite know himself why it mattered to him so much. She cut him off, however.

“No,” she said, and the fire colored her cheeks and lit her eyes. “It is the only way I shall agree to our false engagement. I will not have you trapped into marriage with me simply to protect my reputation, when you have not actually compromised me in any way. I would rather return home this day than have that occur.”

Her chin tipped up, and her hands clenched at her sides. She met his gaze unflinching. He glanced over at Rosalind, who was watching them with a bemused smile. She seemed unfazed by the wild scheme. He was smart enough to let this battle stand.

“You will not trap me into marriage at the end of this, Gemma,” he said, the best promise he could make at the moment. She relaxed at that, a gesture he found intriguing and confusing.Any other girl in town would have been happy to trap a wealthy earl into marriage, he thought; several of them had tried. Gemma Lancaster was in a class by herself.

“It’s settled, then,” Roz said, rising from her desk. “I believe I left something upstairs....”
Amused at the ploy and grateful for the moment alone, Lucas moved closer to Gemma and did what he’d been itching to do since she’d tumbled into the room, all flushed skin and fiery hair—he touched her. His fingers found her hips and settled there for a moment, relishing in the softness, before he pressed his hand flat against the small of her back. She trembled beneath him, her startled eyes lifting to his.

“What is this?” she asked, gripping his upper arms.

“I think we should seal our engagement with a kiss, yes?” He watched her lips part on a quick intake of breath. He brushed a loose copper curl away and cupped her cheek in his rough hand. Something akin to fear showed on her face before curiosity settled upon it.

“Well, it wouldn’t be a proper deal without sealing it,” she murmured, her eyes on his mouth.

Her sense of humor kept surprising him. The odd mixture of amusement and desire was unfamiliar, and it was intriguing. It was something he would be haunted by later, but for now he pulled her flush against him. Every muscle in his body tightened as her subtle curves, the ones he’d known lurked beneath her dowdy dresses, molded themselves to his body. Groaning, he pressed his lips to hers, and lost himself to the feeling of her under his mouth.

It’s just a kiss. Get a hold on yourself.

But even as he had the thought, he wasn’t able to resist deepening it, his tongue exploring the seam of her mouth.

A small gasp, and then she opened for him. She tasted like warm honey.

Somewhere in the back of his mind, warning bells chimed. Too much. Too fast. The feel of her, her heat, her smell was wreaking havoc on his normally ironclad self- control. He was all but calculating the distance to the couch, so that he could lay her down, strip her naked and lose himself in her.

He gentled the kiss, pulling back and nibbling on her freshly plump lower lip. He lingered there, waiting until her ragged breathing evened. Then, with what he swore was an act of God, he stepped back.

Her eyes were glassy, her cheeks flushed. It looked like he had claimed her as his, and something suspiciously close to satisfaction welled in his chest. He tamped it down.

“That should do it,” he said, annoyed at the slight quiver in his voice.

He had to get away before he forgot himself and took her right there in the drawing room.

“I shall see you tomorrow night,” he said as he strode toward the door, not waiting for a response.

“Wait! What is tomorrow night?”
“Lord Conway’s ball. He’s on both of our lists.”

One Step Behind by Brianna Labuskes

Brianna Labuskes’ life-long dream was to join the ranks of the superstar women who penned the romance novels — from historicals to contemporaries and everything in between — of which she could never quite get enough. She tries to write the books she wants to read, with spunky heroines who save the day while their heroes watch in awe and admiration. When she’s not writing, you can find Brianna playing with her two adorable nieces, editing health care policy news (while expounding the virtues of journalism) and watching too much Netflix. She also loves travel, feminism and country music. 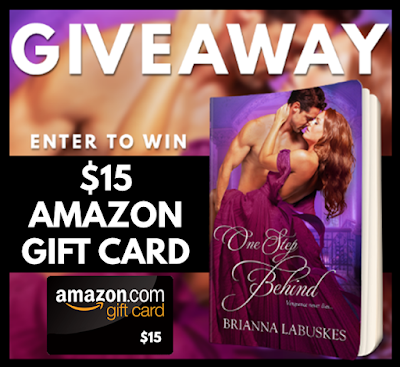