In Ruins by Danielle Pearl 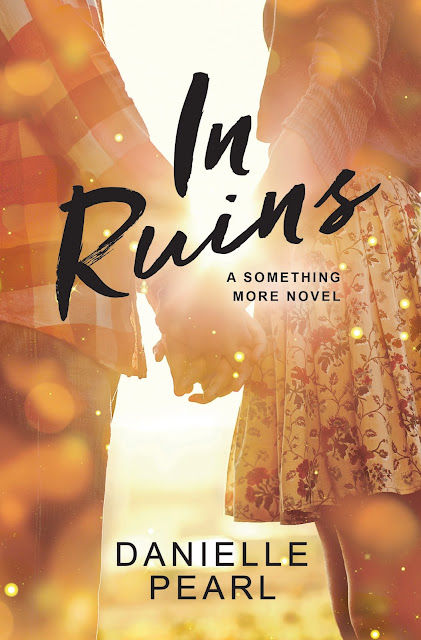 The first New Adult spin-off novel in the bestselling YA Something More series by Danielle Pearl!

She wanted to start again. To be someone—anyone—different. . .

Freedom. When Carleigh Stanger thought of college, that was the word that came to mind. Freedom from her unhappy home life. Freedom from high school mistakes. Freedom from the memory of that terrible morning. Only instead of bringing a sweet escape, Carleigh's first campus party traps her in the scornful gaze of the last person she wants to see, Tucker Green.

It wasn't long ago that being close to Carleigh was everything Tucker wanted. But that was before he realized she was just another scheming girl who'd do whatever it took to get her way. Even lie to the guy she claimed to love. Unfortunately while Tucker's brain remembers the pain Carleigh caused, his body only remembers the pleasure . . . 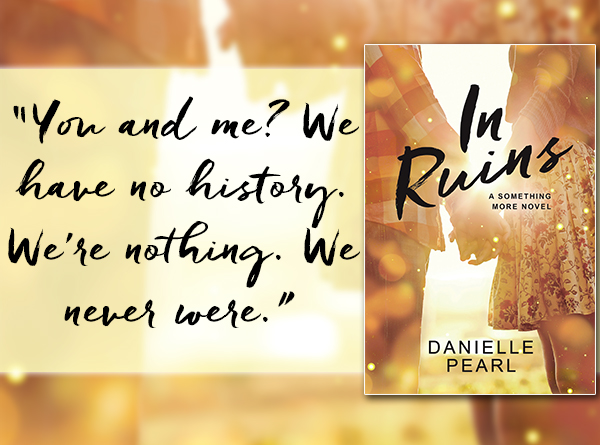 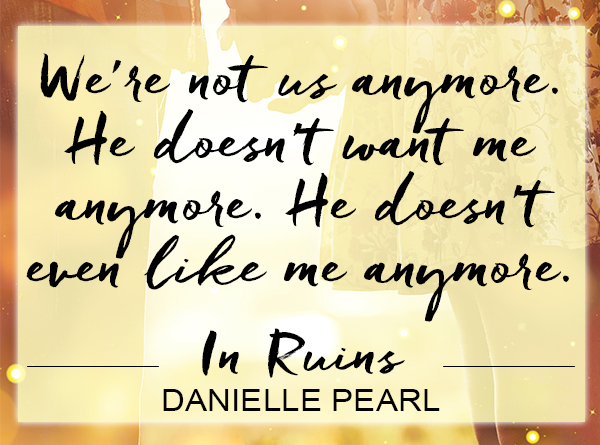 I linger half in a dream, wondering why I feel as if I'm waking up inside my past. My fingers automatically reach to the base of my throat for the white gold crown charm Tucker gave me before graduation last year, a reminder that I would always be his princess. But always didn’t last, and my fingers come up empty as I recall tearing off the necklace and stuffing it unceremoniously into my bathroom drawer minutes after he broke my heart.
The subtle scent of fresh spring soap, aftershave, and the faint musk of last night's sweat ambushes my senses. My eyes flutter open to find dawn breaking in through the window shades. It's still early enough that I doubt anyone else will be awake for a while, but I know that whether it's minutes or an hour, once Tucker's eyes open, it won't be long before I'm asked to leave.
It takes no more than another second or two to register the pattern of his breathing, too lively to indicate sleep, and I stiffen above him. I swallow anxiously and reluctantly look up.
He's watching me, gaze impassive, but his arms don't move. His fingertips dance, feather-light along the small of my back, and I wonder if it's what woke me. I clear my throat, though I have no idea what to say in this moment. But Tucker speaks first.
"This can't happen again. You know that, right?"
I nod. Because I do know. We'll never be friends if we blur the lines with this. Not just the sex. Not even mostly the sex. But this. This intimacy. This is what could break us. Break me.
In an instant, the haze of last night's lust begins to lift, and anxiety settles in its place. Because I doubt I could survive his breaking my heart a second time, and that’s precisely what I’m setting myself up for. I’ve laid my own trap, and I need to free myself before it’s too late.
"We shouldn't be laying in bed like this," I tell him.
His smile is wistful. "I know."
But he makes no move to disentangle himself from me. Instead, he does the opposite, his hand leisurely roving up the avenue of my spine, as if it’s going for a Sunday drive.
I shrug it from my body and sit up, startling him. "Stop doing that," I snap.
"Touching you?" His brow furrows.
"No! Yes. Touching me, and agreeing with me but continuing this... this affection anyway."
"Sorry," he murmurs half-heartedly.
"No you're not."
He frowns as I yank the sheet out from under the bedspread and drape it around myself.
"Maybe it was wrong of me," I admit. "Coming here last night. Maybe I was stupid to believe we could just hook up and walk away. Or that I could. But Tucker, if you wanted to fuck me, then why couldn't you just fuck me?" My words drown in regret. "You can't say these things—about my eyes, how you think about me... You can't stare at me the way you do, or call me Princess. It isn't fair."
"Carl—"
"No, Tuck. You know how I feel about you. And you said it yourself. When you love someone more than your own life, you don't let them go for anything." I stare at him meaningfully. "Anything."
Tucker shakes his head, eyes lined with exasperation. "Carl, I tried to talk to you about that last night—"
"No, Tuck. I get it now," I assure him. "And maybe I always should have known. But you must have, right? Or at least you do now."
"Know what?" His brow furrows deeply, vaguely bewildered.
I glare at him, trying to determine if he's undermining my intelligence or if I'm somehow not making sense. But I know him better than that, and as easy it would be to vilify him right now, I can't lie to myself. "Maybe you really did believe it at the time," I admit. "That you loved me back."
"Carl—"
"Or maybe you really did love me. Just not enough, you know?" I don't bother fighting the tears. He's seen them plenty of times now anyway, and if there's ever been a time to let them flow, it's now.
And Tuck stops his attempts to explain. He blinks at me, stunned silent, and I suspect he's finally grasping the weight of his own words. And I realize that even though he’s the one who said them, it’s only now that he’s really understanding their implications. The truth is obvious and cruel, and with it I can stop wondering. I can stop analyzing his words and guessing at their meaning. Because now I know.
Eventually Tucker sighs, raking his fingers through his hair as he searches for words to placate me. But I don't want his guilt, and I definitely don't want his pity.
I avert my gaze and it lands on his overnight bag, three feet to my right. I force in a deep breath and shove my hand inside it, pulling out the first piece of clothing I can  grab, grateful to discover it's a t-shirt—fitted for him, but oversized for me. I hastily slip it on.
I look back at him, feeling utterly defeated. "You let me go."
We both know now what that says about his love, but this isn’t about blame—this is about acceptance. It’s about moving forward. "So let me go," I beg him, and then hurry out the door.

I've been craving a college romance for awhile now, so when I read the synopsis to In Ruins I knew I had to read it. Although I was pleasantly surprised to discover that this was so much more than just a simple romance story.

Carleigh is trying to get away from her life and start fresh, but the person she most wants to distance herself from is also the person who she wants to see the most, Tucker. And see him she does, because life can be so unaccommodating like that! While Carleigh is trying to find her bearings as a freshman in college, she's also dealing with her feeling for Tucker, and trying to digest the fact that she left her little brother back home. Carleigh is such a strong character and even though I've never been through anything like what she has I found myself connecting with her. I found myself rooting for her to be strong and empathizing with her. I could obviously see the connection between Tucker and Carleigh from the beginning. The pages were practically sizzling in my hands from the heat of their stares, and all of their angry little spats, the perfect foreplay.

I loved the past flash backs it gave and felt like it was done perfectly, because although I knew that there was a secret I didn't know what it was. Little did I know that wasn't the only shocker I was going to get!

This is the first story by Danielle Pearl that I've read and I'm glad to say that it's a very well written and entertaining story, and I will be continuing on with this series because I already read the teaser of In Pieces and MUST HAVE IT! In Ruins is a fantastic start to this new spin off series. 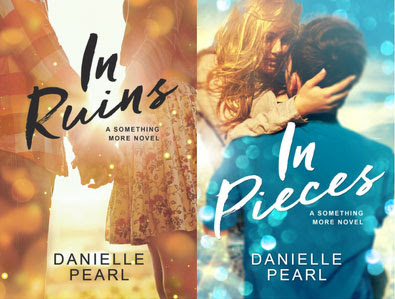 Danielle Pearl is the bestselling author of the Something More series. She lives in New Jersey with her three delicious children and ever-supportive husband, who—luckily—doesn't mind sharing her with an array of fictional men. She did a brief stint at Boston University and worked in marketing before publishing her debut novel, Normal. She writes mature Young Adult and New Adult contemporary romance. Danielle enjoys coffee, wine, and cupcakes, and not in moderation.