The Twenty-Three by Linwood Barclay 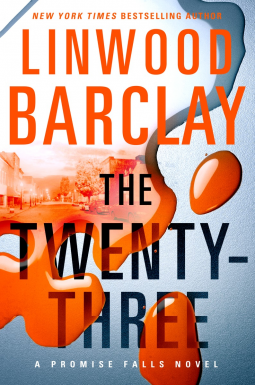 Everything has been leading to this.

It’s the Saturday of Memorial Day weekend, May 23rd, and the small town of Promise Falls, New York, has found itself in the midst of a full-blown catastrophe. Hundreds of people are going to the hospital with similar flu-like symptoms—and dozens have died. Investigators quickly zero in on the water supply. But the question for many, including private investigator Cal Weaver, remains: Who would benefit from a mass poisoning of this town?

Meanwhile, Detective Barry Duckworth is faced with another problem. A college student has been murdered, and he’s seen the killer’s handiwork before—in the unsolved homicides of two other women in town. Suddenly, all the strange things that have happened in the last month start to add up…

Bloody mannequins found in car “23” of an abandoned Ferris wheel…a fiery, out-of-control bus with “23” on the back, that same number on the hoodie of a man accused of assault…

The Twenty-Three is the last book in the Promise Falls series. It has the perfect blend of suspense with an enthralling cast of characters.

So what's it about? In the beginning, we learn that someone might be responsible for poisoning the town's water supply.  Well, let me backtrack a little. Three years earlier a young woman was murdered in the park at night. When she was attacked, many people who were around the area heard her screams but no one got involved. Since then, horrible things have happened to the people living in Promise Falls. Other women have been murdered and the number 23 seems to be making a frequent appearance around mysterious events occurring around town.

On the morning of May 23rd, when numerous people turned up sick with multiple symptoms leading to death, Detective Barry Duckworth has to try to piece together how and why it happened. During the investigation, he's called into another young woman's murder. Barry believes all the weird things happening to the town and the death of the women are all tied together. He knows he has to stop it before the town runs out of time. Of course, there are too many suspects and no clear cut evidence on who's to blame.

I thoroughly enjoyed The Twenty-Three. It has a great variety of characters. My favorites were Barry, Cal, and David. All their stories were interesting and I wanted to see them all alive by the last page.

I can't imagine how guilty some of the people who didn't help the first victim felt. A woman died because no one took a moment to investigate her screams. One of them, gave the excuse that since the screams stopped then it couldn't be anything serious. It saddened me to think this could happen in real life and no one would lift a finger to help out. Hopefully, this is not the case.

I like Barry. He had a problem with his weight but he had decided to do something about it just before all hell broke lose. To be honest, he had me worried throughout the book. I thought he wasn't going to make it, not because the poison or the killer was going to get to him but because he was going to die from a heart attack in the middle of doing his job.

There were some very unlikable characters too. The worst, besides the killer, was the politician. He was despicable. Anything to bring attention to himself and his campaign. He didn't seem to care about anything else but winning.

If you want a town mystery with lots of suspense and a good twist, you'll enjoy this one.