Secrets in the Snow by Michaela MacColl 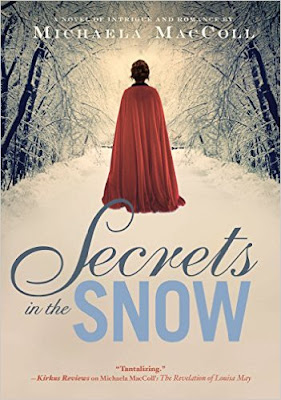 Jane Austen's family is eager to secure her future by marrying her off. But Jane is much more interested in writing her novels, and finds every suitor lacking—until the mysterious Mr. Lefroy arrives. Could he be the one? Before Jane can find out, she must solve a murder, clear her family's name, and face a decision that might cost her true love.

This was a quick and interesting read that I blew through. I found a majority of this book to be quite entertaining, even if it was a bit ridiculous at times.I thought Jane was solid main character. I enjoyed her seeing her try and solve all of the craziness that occurred in this book. I wish there would have been a little more to Jane's character though. I feel like Jane Austen would have been quite a witty woman, and the Jane in this book was not very witty at all. I liked Jane, but it just wish she would have either been sassier or wittier. There was some romance sprinkled through out this book, and there were so really tender moments because of that. The romance really reminded me of the romance in Becoming Jane , which makes sense since they are both about Jane Austen!Tom was a dreamy at times but then very annoying at other times. I became very irritated with him numerous times and it was frustrating. I was hoping to love him as much as I loved his equivalent in Becoming Jane , but I sadly didn't. I didn't hate Tom, but I didn't love him either. The plot of this book was definitely entertaining. I thought the mystery was enjoyable even if it was very predictable. I would recommend that Jane Austen fans check this out and see if this is up their alley. This book isn't as romantic as books written by Jane Austen, but it was still fun nonetheless.