My Brown-Eyed Earl (The Wayward Wallflowers #1)
by Anna Bennett 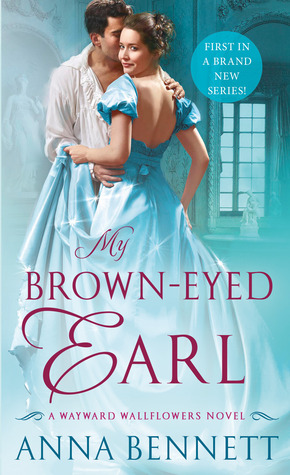 NEVER SEND A DEBUTANTE William Ryder, Earl of Castleton, is at the end of his noble rope. Not only has he broken ties with his longtime mistress, his mother has publicly announced her wish for him to marry a suitable young lady―if only to help him raise the twins left in his care. Hiring a governess should solve some of Will’s problems…but when he meets the candidate in question, he finds himself in an entirely new predicament.TO DO A WALLFLOWER’S JOBMiss Margaret Lacey is brainy, beautiful, and, once upon a time, Will’s betrothed. But she bowed out of the engagement―and, since then, has never been the same. A tragic accident robbed her of everything, and now, at age twenty-three, her marital prospects are slim to none. Penniless but not without pride, Meg convinces the vexingly handsome Will to hire her for the job. What neither of them could have expected from this arrangement, however, is an attraction that burns stronger than ever. Are these two lost souls finally ready to be schooled in the art of love?

“My Brown-Eyed Earl is a fun and lovely story that’s heartwarming and joyous. Bennett’s engaging hero and heroine are nothing compared to 6-year-old twins who steal the show and readers’ hearts. But it’s more than characters that make this a wonderful read, it’s the heartfelt storytelling and depth of emotion as the characters growth takes center stage and a second chance at love seems possible. A delightful read!”
—RT Book Reviews on My Brown-Eyed Earl

"Heart, humor, and a hot hero. Everything I look for in a great romance novel!"


— Award winning author Valerie Bowman on I Dare the Duke

End of Chapter 1:
Will leaned forward on his elbows and pinched the bridge of his nose. Somehow, in the space of a week, his highly ordered, luxurious life had fallen apart.
First, Marina, the beautiful widow he’d been seeing, hinted that she wanted more than the mutually pleasurable arrangement they’d agreed to, forcing Will to break things off with her.
Next, his recently deceased cousin’s mistress showed up on Will’s doorstep with the twin girls, threatening to leave them at an orphanage unless he took them in.
And then last night, he attended a dinner party in honor of his mother’s birthday. In front of a dozen guests, she announced her sole wish: that her son marry before she turned fifty—in exactly one year. After choking on his wine, Will promised to give the matter some thought.
Then he had gone directly to his club and drunk him- self into oblivion.
Jesus. He stood, ran his hands through his hair, and checked his reflection in a mirror between a pair of book- cases. Gibson was right—he looked like hell.
Bad enough to scare off a potential governess.
He swiped the cravat off his chair, slung it around his neck, hastily tied it in some semblance of a knot, and but- toned his jacket. There was nothing to be done about the stubble on his chin or the faint imprint the desk blotter had left on his cheek, so he threw back the rest of his coffee and congratulated himself. Within the hour he’d have a governess to manage the twins, and at least one aspect of his life would be set to rights.
Gibson was already shuffling down the corridor. “My lord,” he intoned from the doorway, “may I present Miss Lacey.”
Will blinked. Lacey . . . it was a common name. Surely the potential governess couldn’t be—
She glided into the study and cast a wary look his way.
“Good afternoon, Lord Castleton. It’s a pleasure to see you again.”
Dear God. It was her. The vicar’s daughter who thought she was too damned good for him. Standing in his study, cloaked in a drab dress that might have been lilac once but now more closely resembled gray. No ribbons adorned her brown hair. No ringlets framed her face. In fact, the only decoration she wore was the light smattering of freckles across her nose.
The butler raised his bushy brows. “I was not aware that you were already acquainted.”
“Thank you, Gibson. That will be all.”
The butler left reluctantly, closing the door behind him. Miss Lacey pressed her lips together as though she longed to say something and silence herself at the same time. From what he recalled of her tongue, it was best kept under lock and key.
“What on earth are you doing here?” Will demanded.
“Applying for the governess position. I assumed you knew.”
“No,” he said curtly.
“I see.” She glanced over her shoulder at the door. “Per- haps it would be better if I—”
“Be seated, Miss Lacey.” He inclined his head toward the armchair in front of his desk.
She hesitated, and for a moment he thought she’d refuse. But then she walked toward the chair, looked at the seat, and froze. Just as stubborn as he remembered, unbiddable as ever.
He bristled. “Perhaps you’d prefer to remain standing for the entire interview?”
“No. It’s only . . .”
“You object to meeting in my study?”
She narrowed eyes that were not quite green, but not quite brown either. “No, but I hoped to avoid sitting on this.” In one, fluid motion she leaned over the chair, picked up a pink, lace-edged scrap of satin between her thumb and index finger, and dangled it in front of his face.

CREDIT: From MY BROWN-EYED EARL by Anna Bennett. Copyright © 2016 by the author and reprinted by permission of St. Martin's Paperbacks.

I was so surprised that this was a debut novel by Anna Bennett! I thought the dialogue and the flow of the story was really well done, especially for a new author. The plot of the book kept me interested the entire time, even during the slower parts. There were also some suspenseful moments that I was not expecting! Even though the suspense felt a little out of place and dramatic, it added an exciting element to the plot. This was a light-hearted, romantic, and fun read.The main character, Meg, was witty, smart, kind, and strong willed. I liked how she would stand up for herself and not let men objectify her. I thought the main male character, Will, was very swoon-worthy! He was a little rough around the edges at first, but as he showed his softer sides, I definitely warmed up to him. I feel like Meg grounded Will and made him seem more realistic. I thought Meg was a great match for Will. They were a couple that listened to each other, talked things out, and worked on their relationship. I was grateful for that because it helped cut back on unnecessary drama between them. The relationship felt a little insta-loveish and dramatic at first, but overall, I enjoyed the progression of their relationship. The passion they shared was obvious and it lead to some very steamy scenes! I thought the author did a great job and creating chemistry between Meg and Will that felt palpable.My Brown-Eyed Earl was a charming and quick read. I am a huge fan of historical romances, and I think others who love historical romances will really enjoy this adorable story! I am so excited to read the next book in this series and see what Anna Bennett has in store for me!

Anna Bennett started swiping romances from her mom’s bookshelf as a teenager and decided that books with balls, dukes, and gowns were the best. So, when she had the chance to spend a semester in London she packed her bags—and promptly fell in love with the city, its history, and its pubs. She dreamed of writing romance, but somehow ended up a software analyst instead.

Fortunately, a few years and a few careers later, Anna found her way back to writing the stories she loves and won the Romance Writers of America’s Golden Heart®. She lives in Maryland with her husband and three children, who try valiantly not to roll their eyes whenever she quotes Jane Austen. Other weaknesses include reality TV, cute shoes, and coffee. Lots and lots of coffee.
Posted by MissDaemon at 8:00 AM