Off the Clock by Roni Loren 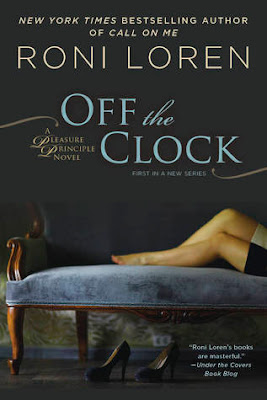 FROM THE NEW YORK TIMES BESTSELLING AUTHOR OF THE LOVING ON THE EDGE NOVELS, THE FIRST IN A SENSUAL NEW SERIES

Overtime has never felt so good…

Marin Rush loves studying sex. Doing it? That’s another story. In the research lab, Marin’s lack of practical knowledge didn’t matter, but now that she’s landed a job at The Grove, a high-end, experimental sex therapy institute, she can’t ignore the fact that the person most in need of sexual healing may be her.

Dr. Donovan West, her new hotshot colleague, couldn’t agree more. Donovan knows that Marin’s clients are going to eat her alive unless she gets some hands-on experience. And if she fails at the job, he can say goodbye to a promotion, so he assigns her a list of R-rated tasks to prepare her for the wild clientele of The Grove’s X-wing.

When Marin Rus was eighteen and helping with sleep study research her world came apart. First, she had her first sexual encounter with Donovan West.  She never forgot him and she never expected to see him again. Now, years later, Marin needs money fast to help with her brother's college expenses. Joining The Grove, a sex therapy institute, is sure to bring her what she needs. Marin is worried about her inexperience but she has worked hard to achieve her success. Nothing will interfere. This lasts 2.0 seconds until she bumps into Dr. West.

Donovan West is cocky, smart and now Marin's boss. He's the one who's going to be responsible in making Marin a permanent team member at The Grove. He just needs to keep his hands to himself. A task that is becoming harder and harder to do.  Marin is not helping, blushing every time a patient is crude during their sessions. What's a guy to do but offer to help her off the clock to get the experience she needs.

I'm a fan of Roni Loren's work. She weaves a great story within the romance. Off The Clock had all the components I'm used to expecting from her work.  I like that Marin was able to stand up for herself. She was feisty and had a backbone. Donovan's issues were well portrayed and believable. And don't get me started on their sexy times! They were so hot together!!!

I'm also so happy, Roni included a short story. It was perfect!

"I can't be your boss. Because if what I have in mind is going to work, it's going to have to be strictly off the clock and off the record."