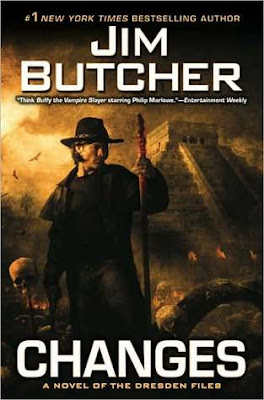 Long ago, Susan Rodriguez was Harry Dresden's lover—until she was attacked by his enemies, leaving her torn between her own humanity and the bloodlust of the vampiric Red Court. Susan then disappeared to South America, where she could fight both her savage gift and those who cursed her with it.

Now Arianna Ortega, Duchess of the Red Court, has discovered a secret Susan has long kept, and she plans to use it—against Harry. To prevail, this time, he may have no choice but to embrace the raging fury of his own untapped dark power. Because Harry's not fighting to save the world...


He's fighting to save his child.

Changes start with a shocking truth. Harry is a father. Long ago, he and Susan Rodriguez were in love and from this love a child was born. A child Harry knew nothing about. Harry is more than angry about Susan hiding the child from him but he has no time to dwell on it since someone has kidnapped her and all the fingers point to Arianna Ortega, the Duchess of the Red Court Vampires. Arianna has not forgiven Harry for killing her husband. She wants Harry dead but she wants to make him suffer first.

Changes is fast-paced, has crazy twists, with great evils and devastating losses. In a way, Harry loses almost everything. One thing is clear. He would do anything to keep his daughter safe. One of the things I enjoyed is how much Harry is starting to trust Molly. Yes, she has made mistakes but she has evolved. I still have hope they can become a couple sometime soon.

Changes was the perfect name for this book. Some included: Harry's daughter, home, car, Lloyd Slate, Susan, The Red Court of Vampires, his new job. It also adds more interesting characters like Donar Vadderung who is probably the god Odin. We get to see Harry interacting with past characters like Anastasia Luccio, Ebenezer, the Merlin Arthur Langtry and the Leanansidhe, who plays a major part in this book including giving Harry the Ruby of Pathfinding.

"You are far from your sources of power here, my dear demon."