The Return by Jennifer L. Armentrout 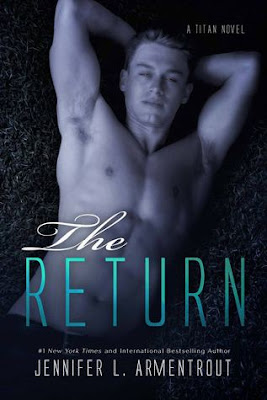 The Fates are cackling their bony asses off…

It’s been a year since Seth made the deal with the gods that pledged his life to them. And so far, the jobs they’ve given him have been violent and bloody–which is kind of all right with him. But now Apollo has something else in mind for Seth. He’s got to play protector while keeping his hands and fingers off, and for someone who really has a problem with restraint, this new assignment might be the most challenging yet.

Josie has no idea what this crazy hot guy’s deal might be, but it’s a good bet that his arrival means the new life she started after leaving home is about to be thrown into an Olympian-sized blender turned up to puree. Either Josie is going insane or a nightmare straight out of ancient myth is gunning for her.

Why did I take so long to read this? I mean I love everything JLA writes and I'm a huge fan of the Covenant series. So, I'm at a loss...

The Return has the same style as the series it precedes. I was already in love with Seth from before and his huge sacrifice to help Alex. I knew there was a good guy in him all along and I'm so happy he got his own series.

Seth has to do everything Apollo or the other Gods order him to do. His latest assignment is to find a person. Apollo only gives him the initials J.B. When he gets to the college where JB resides, to his shock JB is a human girl with vivid blue eyes. Just like someone else's he knows. His job is to protect her and take her to a safe place. It is not to fall for her.

Josie comes from a very lonely background. She grew up in a small town where everyone thought her mother was crazy. She had no friends growing up except for Bob. Now, as an adult, she is far away from home. No one knows about her past except her roommate Erin. Then, one day, her world is shaken when a golden-eyed guy steps into her path. He is adamant that she is not what she thinks she is and her life is in mortal danger.

I loved this book. Seth and Josie's chemistry was spectacular. I loved their nicknames and the way they kept on telling each other they didn't like one another.
This book has the same type of humor I saw in the Covenant Series. Apollo always cracks me up. Especially, when he is quoting Star Wars.
I do kind of miss Alex and Aidan. I wonder if we are going to see them in books to come.